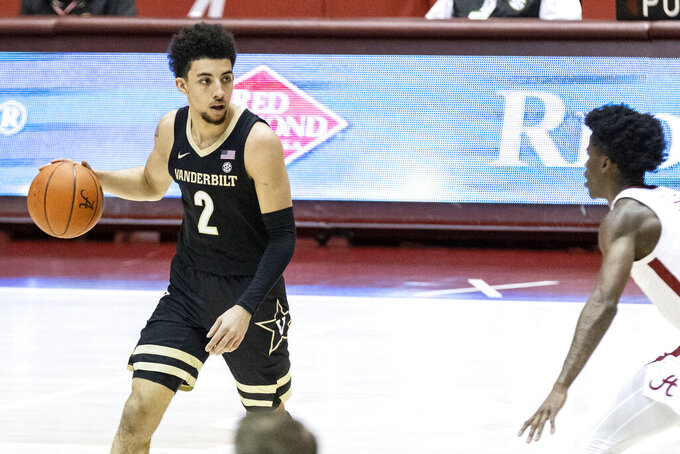 Vanderbilt guard Scotty Pippen Jr. (2) works the perimeter against Alabama during the first half of an NCAA basketball game on Saturday, Feb. 20, 2021, in Tuscaloosa, Ala. (AP Photo/Vasha Hunt) 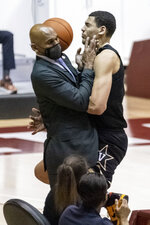 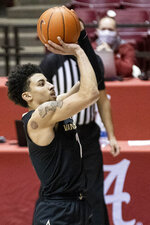 The result was familiar, if not the methodology: another Crimson Tide win.

Jaden Shackelford scored a season-high 27 points and No. 8 Alabama came from behind to beat Vanderbilt 82-78 Saturday and move a step closer to a Southeastern Conference championship.

“That's what our team is about," Tide guard John Petty Jr. said. "We're about pulling wins out even though we're not shooting well or doing what we do best.

The Tide (18-5, 13-1 SEC) moved within a win of clinching at least a share of their first regular-season title in 19 years despite an off 3-point shooting performance.

Jahvon Quinerly made a late 3-pointer and a clinching free throw with 2 seconds left to help Alabama quell the upset bid by the Commodores (6-12, 2-10), who went nearly five minutes without a basket but stayed in it at the free-throw line.

Maxwell Evans made a layup with four seconds left to pull to within 81-78 after rebounding a missed 3. After a quick Vandy foul, Quinerly missed one free throw and made another to clinch it.

Quinerly scored 15 points for the Tide, who made just 10 of 39 3-point attempts (25.6%). Alex Reese scored 10 points while Keon Ellis had eight points and nine rebounds, including a pair of free throws with 28 seconds left.

Alabama overcame low scoring from Petty (six points) and Herb Jones (eight before fouling out). Shackelford came within one point of his career high despite making just 1 of 9 3s, frequently scoring on drives instead.

“I had no problem taking 39 3s,” Tide coach Nate Oats said. “If they're good shots, take them. But we've got to have our shooters knocking down some shots.”

Scotty Pippen Jr. scored 24 points and made 12 of 14 free throws for Vanderbilt. Dylan Disu had 17 points and 15 rebounds for another double-double. The SEC's leading rebounder had 29 points and 16 boards in a loss to Kentucky.

“A lot of ebbs and flows to the game,” Vandy coach Jerry Stackhouse said. "They made a run. We made a run. I thought we competed.

“We gave up a few more offensive rebounds than we wanted to and they were kind of costly for us.”

“The contract obviously was a little bit of a distraction,” the Tide coach said. “Had to make sure I talked to a lot of the guys on the phone before it came out, text them before it came out. Just thank them all personally.”

Alabama forward Jordan Bruner started after missing the past nine games with a right knee injury. He had one point and six rebounds in 19 minutes, but Petty said he brought needed vocal leadership.

“We've been kind of lacking that these past few games without him,” Petty said.

Vanderbilt: Made five of its first six 3-point attempts to build a seven-point lead midway through the first half. Then the Commodores missed their next nine shots on their way to another competitive SEC defeat.

Alabama: Cooled off considerably from a 115-point explosion last weekend against Georgia. Playing its first game since its midweek Texas A&M trip was postponed because of the weather. Honored the seniors afterward, though a home game against rival Auburn remains.

Oats started walk-on Tyler Barnes on senior day. Barnes missed an early 3-pointer in just his first career shot. Oats said Reese offered to give up his starting spot during pre-game, but freshman Josh Primo came off the bench instead.

Alabama starts a two-game road swing with a visit to second-place Arkansas on Wednesday night and can clinch the title outright with a win.