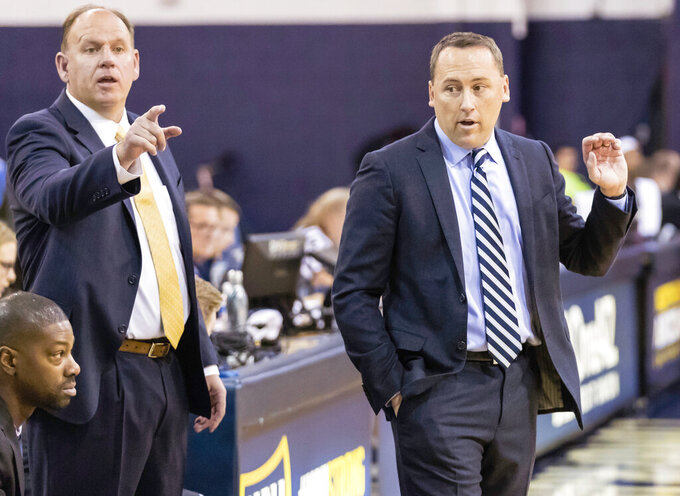 FLAGSTAFF, Ariz. (AP) — Northern Arizona could have been in a tough spot when basketball coach Jack Murphy opted in June to leave the program to become the associate head coach at his alma mater.

If coaches leave, it's usually around the Final Four. By June, the coaching carousel is usually done turning, so Murphy's timing could have set the Lumberjacks back in what was expected to be a rebound season.

Turns out, the school had the perfect person to take the reins and not miss a beat.

Shane Burcar may have been a high school coach less than 18 months earlier, but he spent a year watching Murphy run the program, knew the team inside out and had the respect of the players.

"It's his basketball acumen, his passion for the game, the difference he can make for young people," Northern Arizona athletic director Mike Marlow said. "And his heartfelt desire to get a shot and his belief in himself in this staff and this team, it was a combination of all of those."

Burcar had been a career high school coach before taking Murphy up on an offer to become an assistant at Northern Arizona in 2018. Burcar was happy coaching at the high school level, but didn't want to look back at his career and ask what if.

Burcar's trajectory took a quick turn upward one early June morning when he received a text from Murphy asking to meet in the office. Burcar figured Murphy wanted to watch film or maybe talk basketball.

When Murphy shut the door and got very serious, Burcar knew something else was going on.

Murphy told Burcar of his plan to leave NAU and become associate head coach on Sean Miller's staff in Tucson. Murphy graduated from Arizona and spent eight years on Lute Olson's staff, starting as a student manager. He met his wife in Tucson and their twin daughters were born there.

Murphy couldn't pass up the opportunity.

He also told Burcar he was recommending him to serve as interim coach.

"He's such a class act," Burcar said. "For coach Murphy to do that and the administration to support me for a year, I'm so thankful he came through like that."

Burcar started his coaching career under the mentorship of Tom Bennett, father of Saint Mary's coach Randy Bennett and a longtime high school and junior college coach in Arizona.

Burcar worked his way through the ranks and spent 12 seasons as the head coach at Mesa High School in the Phoenix suburbs, leading the Jackrabbits to the 2016 Class 6A state championship and seven regional titles.

Once at Northern Arizona, Burcar soaked up everything he could, joining Murphy for meetings, constantly asking questions to learn the nuances of the NCAA and Division I basketball.

When the time came to run the program himself, Burcar was ready.

The first few weeks were a whirlwind, but Burcar has leaned on his experience in running a large high school program and the lessons he learned as Murphy's assistant. He still talks to or texts with Murphy nearly every day and has gotten advice from Bennett.

Burcar has a year to prove he's the right man for the job.

"All I'm looking for is an opportunity," he said, "and if you said, 'Hey, you can go take a chance on yourself for one year,' I'm all in."

Burcar certainly has an opportunity to have immediate success.

Before leaving for Arizona, Murphy was more excited for the 2019-20 team than any other he's had since the year after the Lumberjacks set a school record with 23 wins in 2014-15. Assistant Jason Sanchez returned and Gaellan Bewernick, a graduate assistant last season, was elevated to full-time assistant coach, giving Northern Arizona continuity on the staff.

The Lumberjacks also have avoided a common pitfall when a coach leaves, retaining the entire roster and recruiting class — a testament to the respect they have for Burcar.

"It demonstrates the players' belief in him," Marlow said. "I also think it speaks volumes for our student-athletes in that they realize they can do some special things. Certainly, deciding to stay, they think they can do it with Shane."