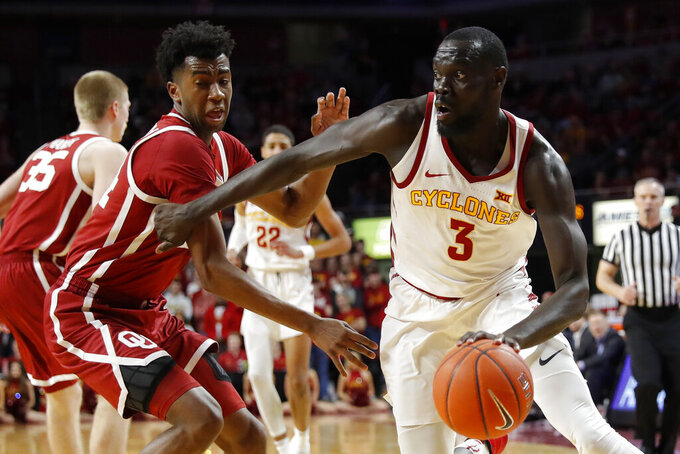 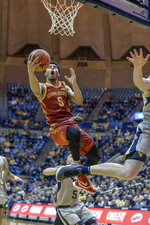 AMES, Iowa (AP) — Iowa State star Marial Shayok considers himself a game-time decision for Saturday's matchup against No. 8 Texas Tech because of a sprained pinkie toe.

Shayok, who is averaging a team-high 18.7 points per game, injured his foot at practice on Monday and spent Wednesday's loss at West Virginia watching from the bench in a boot. Shayok said that his ability to handle pain will determine whether he plays, adding that he won't rush the issue with the Big 12 and NCAA Tournaments coming up in the weeks ahead.

Shayok's sore toe is far from coach Steve Prohm's biggest concern: The Cyclones (20-10, 9-8 Big 12) are in something of a tailspin.

They have lost five of their last seven games — a stretch capped by a 15-point drubbing against the cellar-dwelling Mountaineers — and Prohm said he can't quite figure out why a team that looked so good in early February is stumbling in March.

"It's focus and effort and togetherness. We've got to get that back, because we had it at the highest level. Everybody saw that, and we had it three weeks ago," Prohm said. "That's what the toughest part of coaching is, trying to figure out what happened and how to fix it when it's not something where you look at it and it's black and white."

Iowa State was riding high after dismantling league-leading Kansas State 78-64 in Manhattan on Feb. 16. But the Cyclones followed that up by letting Baylor dictate the tempo in a four-point home loss. Despite a second-half rally, they fell at TCU, 75-72, a few days later.

Iowa State returned home and dominated Oklahoma in a 78-61 blowout that made it seem as though it had worked out its kinks.

Texas, on the strength of 15 of 25 shooting from 3-point range, beat Iowa State 86-69 on Saturday. A bad West Virginia team did the same on Tuesday, a game in which Michael Jacobson and freshman Talen Horton-Tucker were caught jawing at each other during a stoppage in play.

Prohm met individually with his players after the Mountaineers debacle, and the team had a players-only meeting as well in an effort to turn things around.

"Losing magnifies everything ... everyone is competitive, and guys get upset," said Jacobson, who added that he and Horton-Tucker have hashed out their differences. "Regardless of whatever we have going on outside, or so-and-so is mad at so-and-so, you're not going to win with the kind of effort that we gave at West Virginia. I think just getting back to committing on defense, playing hard on both ends and really just giving a crap about Iowa State (is key)."

Texas Tech has won eight in a row and five of its last six by at least 15 points. Even if Shayok plays, he might not be at his best — and the Red Raiders can clinch at least a share of the first Big 12 title in school history with a win.

For the Cyclones, a cohesive and solid effort against Tech might be the first step in rediscovering their chemistry.

"We all have to work at getting it better and changing it," Prohm said. "That's not one individual guy. It's not one X and O thing. It's just, collectively, we've got to be better. I don't have a magic answer. You could pinpoint five, six or seven things."