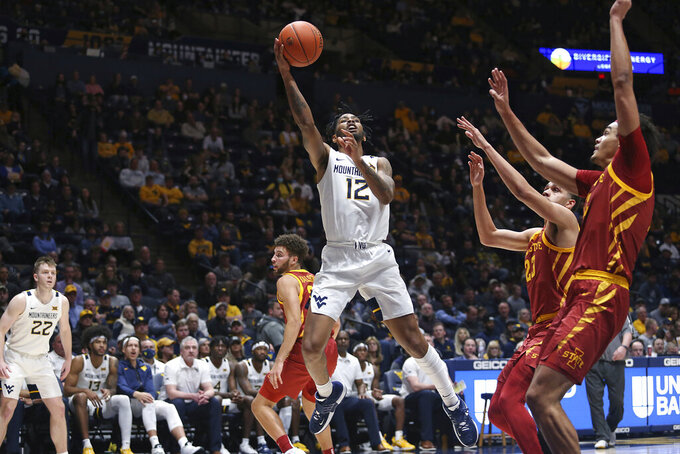 The Mountaineers never trailed and led by double figures most of the second half. Izaiah Brockington made consecutive layups to bring the Cyclones within 65-57 with 5:26 left before Malik Curry and Sherman each sank a pair from the foul line to create some space.

West Virginia survived a season-high 20 turnovers with the help of 22-for-44 shooting overall, 10 for 20 from 3-point range and 25 for 29 from the foul line. The Cyclones struggled from the foul line making just 12 of 22.

Sherman, the Big 12′s second-leading scorer who entered averaging 18.9 points per game, missed Saturday's game against Texas Tech with a concussion after getting hit in the jaw late in a loss at Baylor on Jan. 31.

Reserve Seth Wilson went on his own 7-0 run with a layup, 3-pointer and jump shot as the Mountaineers built an 18-5 lead in the first seven minutes. West Virginia led 39-28 at halftime as Sherman scored 10 points and grabbed six rebounds. Caleb Grill came off the bench for the Cyclones to shoot 4 of 5 from beyond the arc as the rest of the team shot 7 for 25 overall.