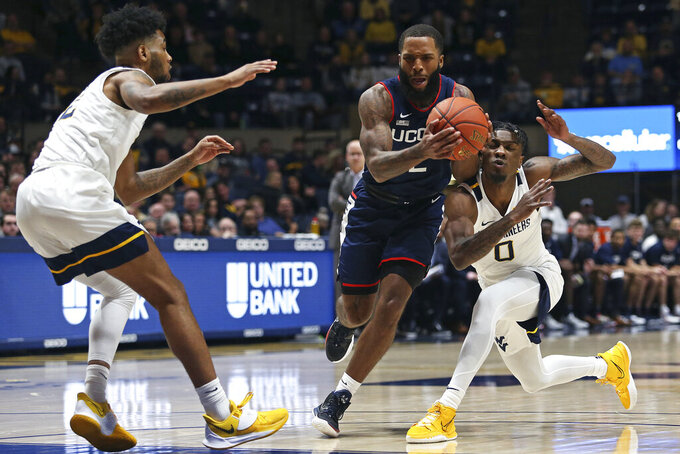 MORGANTOWN, W.Va. (AP) — West Virginia and No. 15 UConn bruised and fought to the finish, just like old times.

Taz Sherman scored 23 points and West Virginia held on for a 56-53 victory over its former Big East foe on Wednesday night.

The game was part of the Big East-Big 12 Battle and resembled the teams' typically physical matchups of a decade or so ago. The Mountaineers left the Big East after 17 years to join the Big 12 in 2012.

“We knew what type of game it was going to be,” Sherman said. “It wasn’t really a big rivalry game, but in a way, it almost felt like that.”

The Mountaineers (8-1) were terrible at the free throw line but made enough in the closing minute to beat a ranked opponent in their first try this season.

Sean McNeil, who missed West Virginia’s last game with a sore back, added 16 points for the Mountaineers.

Short-handed UConn (8-2) was held to a season low in points in its first true road game. Isaiah Whaley led the Huskies with 15 points. R.J. Cole added 14 and Andre Jackson scored 10.

“Tough loss. Hard-fought game. Real physical game and both teams played, I thought, incredibly hard," UConn coach Dan Hurley said. "Obviously, really ugly, but based on both of our identities you knew it was going to be a low-scoring game. A real physical defensive struggle.”

It also was a struggle at the free-throw line for West Virginia, which went 12 of 27 (44%), its worst performance of the season.

Coach Bob Huggins said he doesn't have to tell his players anything about the missed free throws, saying they know where the practice gym is and the older players are great about getting everyone in there to work on their shots.

“There's only one way you can fix them and that's go work on them,” Huggins said. “That place is open 24/7 for them.”

For the season, West Virginia is shooting 61% from the line, putting the Mountaineers in the bottom 10 among 350 teams in Division I.

“We’ll fix it," Sherman said. “It just wasn’t the day today. We’re going to fix it and we’re going to be a better ball club when we start making free throws.”

West Virginia doesn’t have a dominant rebounder after losing double-double machine Derek Culver to the NBA draft last spring. The Mountaineers gave up plenty of extra chances in the paint to UConn, which held a 35-31 rebounding advantage.

After Pauly Paulicap and Sherman each made a free throw to put West Virginia ahead 53-51, UConn missed four shots on the same possession with under a minute left.

Huggins pointed out that, luckily for West Virginia, UConn "got a lot of rebounds, but they didn't get a lot of second-chance points.”

After West Virginia finally got the ball back, Sherman was fouled, made the first free throw and missed the second. But West Virginia teammate Gabe Osabuohien got the rebound and McNeil was fouled with 17 seconds left. McNeil made two free throws for a 55-51 lead, and UConn's Isaiah Whaley answered with a tip-in with 7 seconds left.

McNeil was fouled again and made one of two free throws, and Cole missed a 3-point try as time ran out.

Sherman and McNeil each had 13 points in the first half, when there were 10 lead changes. The Mountaineers led 32-29 at halftime.

UConn starting guard Tyrese Martin is out with a fractured left wrist and forward Adama Sanogo will miss several weeks with an abdominal strain. They combine to average more than 28 points per game.

UConn: The Huskies went 3-of-21 (14%) from 3-point range and couldn't make the most of their second chances to score under the basket.

West Virginia: The Mountaineers turned up their defensive intensity in the closing minutes and squeaked out the win despite getting little production from their bench.

“I think we just turned up the defense a little bit more, started getting them to create turnovers for them, and they started throwing us the ball a lot," Sherman said. "I think we did a way better in the second half than the first half with our intensity.”