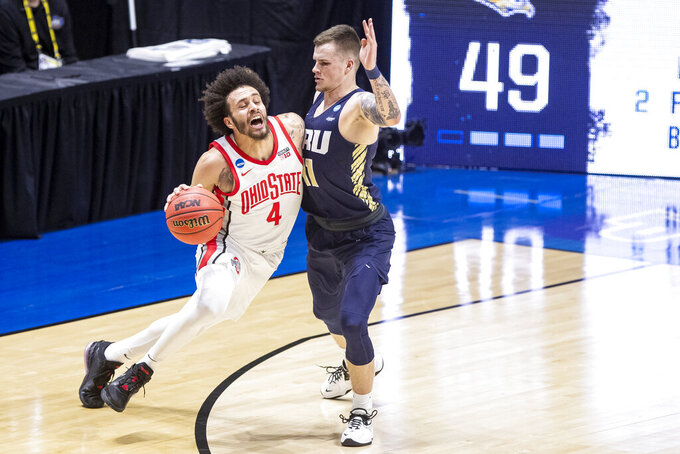 COLUMBUS, Ohio (AP) — This one is going to sting for a while.

The disappointment from second-seeded Ohio State's shocking first-round NCAA Tournament loss to No. 15 Oral Roberts promises to linger in Columbus as the Buckeyes reflect on a pandemic-disrupted season and start looking ahead.

Turnovers, defensive struggles and a failure to make critical shots late plagued the Buckeyes in the 75-72 overtime loss to Oral Roberts on Friday.

“We just had some uncharacteristic misses from guys that are terrific shooters,” coach Chris Holtmann said after the quick tournament exit.

Maybe it was a little comfort to Ohio State (21-10) that Oral Roberts, a private school in Tulsa, Oklahoma, that punched its tournament ticket by winning the Summit League tournament, upset seventh-seeded Florida on Sunday to become the second 15th seed ever to advance to the Sweet 16.

Regardless, the window was open for Ohio State to make a deep tournament run, and again Holtmann, the fourth-year coach, couldn't get the Buckeyes over the hump. Despite 20-win seasons, Ohio State failed to make it out of the first weekend in its last three tournament appearances. The 2020 event was canceled due to the pandemic.

“We all have to be responsible for not quite getting it done and it begins with me, first and foremost with me,” Holtmann said. “There were some tremendous moments this season. By and large it was a special year with a conclusion that we’ve got to lean into. It’s incredibly disappointing.”

Behind sophomore forward E.J. Liddell, who developed into a dominant player, and junior 3-point specialist Duane Washington Jr., the Buckeyes put together a seven-game winning streak that lifted them to No. 4 in the AP Top 25 in mid-February before they dropped the last four games amid some of the same issues that arose in the Oral Roberts loss. Then they won three games in three days in the Big Ten Tournament to get to the final, only to run out gas in a loss to Illinois.

When it comes to personnel, Ohio State should have a good core next season, with leading scorers Liddell and Washington — both averaged a little over 16 points per game — returning along with most other major contributors. Meechie Johnson Jr., who graduated from high school early and arrived midseason, will get a shot at point guard, but the Buckeyes desperately need to find a big man who can play around the rim.

The only definite departure is senior point guard CJ Walker. Forward Kyle Young, who served as valuable muscle around the basket, is a senior but hasn't said whether he will return for the extra season afforded by the NCAA. He didn't play in the NCAA Tournament game because of a concussion.

The loss was compounded by some racist and insulting tweets received by Liddell that led the program to contact police.

“Honestly, what did I do to deserve this?” Liddell posted on Twitter. “I’m human.”