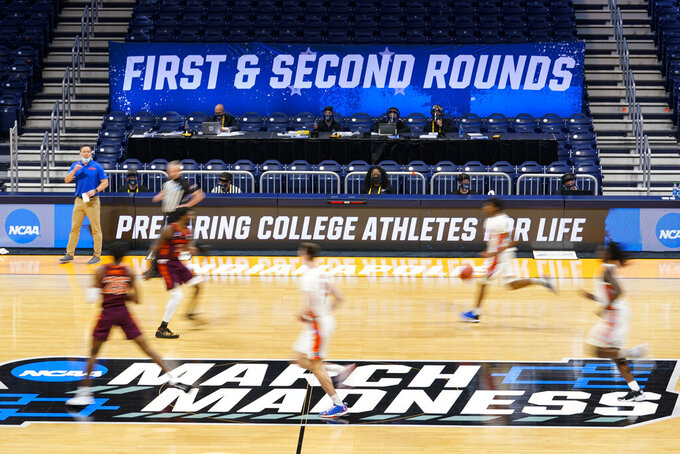 Florida plays against Virginia Tech in the second half of a first round game in the NCAA men's college basketball tournament at Hinkle Fieldhouse in Indianapolis, Friday, March 19, 2021. (AP Photo/Michael Conroy) 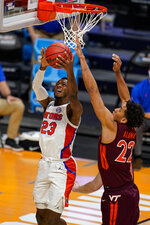 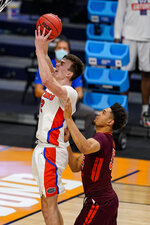 INDIANAPOLIS (AP) — Florida overcame playing short-handed most of the season after preseason SEC player of the year Keyontae Johnson was lost because of a scary medical episode.

The Gators did it again, getting through to the second round for an eighth straight NCAA Tournament appearance — and doing it without two key contributors.

"This team just continues to show character,” Florida coach Mike White said. “No one’s been through what they’ve been through.”

Colin Castleton scored 19 points and grabbed 14 rebounds, Tre Mann hit a step-back 3-pointer with 23 seconds left in overtime and the seventh-seeded Gators held off No. 10 seed Virginia Tech 75-70 in a first-round game on Friday.

Florida was cheered on by Johnson, who has turned into a de facto assistant coach since returning to the team following a December game in which he collapsed on the court and was hospitalized. He is still recovering from the episode, and doctors told him he could not play again this season.

The Gators had plenty of time to learn how to play without Johnson. But they opened the NCAAs without key forward Omar Payne, who was benched by White, and lost starting guard Tyree Appleby midway through the second half after an inadvertent elbow opened a gash on his forehead.

Enter Castleton, who was dominant on the inside. And Mann came through with a pair of key 3-pointers late to send the Gators (15-9) into the second round to face Oral Roberts after it stunned No. 2 seed Ohio State.

Mann hit a 3 with 2:49 left in regulation, a shot that became huge as Virginia Tech rallied in the closing seconds and forced overtime on Nahiem Alleyne’s 3-pointer with 1.4 seconds left. Mann’s second big 3-pointer gave the Gators a 74-70 lead and proved enough after Cordell Pemsel’s missed jumper with 10 seconds left.

Mann, an all-SEC performer, finished with 14 points. Scottie Lewis added 15 for the Gators.

Alleyne was brilliant for the Hokies (15-7) through regulation but was held to just one basket in overtime. He finished with 28 points and scored the final 12 of regulation for Virginia Tech.

“I mean it was a crazy feeling. Everybody’s dream is to hit a big shot. Big-time players made big-time plays,” Alleyne said of the tying 3-pointer. “It was just a crazy feeling. I mean that wasn’t really the play. We were supposed to give the ball to Tyrece (Radford), but they were shading his side so Keve (Aluma) passed it to me and I just knocked it down.”

Tyrece Radford added 16 points for the Hokies and Hunter Cattoor finished with 11 off the bench. Virginia Tech hit 5 of its first 10 3-point attempts, but made just two the rest of the way.

Florida held Keve Aluma, Virgina Tech's leading scorer at 15.6 points per game, to just seven points before he fouled out early in overtime. Aluma appeared to believe the foul was only his fourth. Virginia Tech coach Mike Young said he considered keeping Aluma on the bench to start overtime.

“That was a poor choice on my part,” Young said.

The opener of the tournament at historic Hinkle Fieldhouse didn’t disappoint for drama as the short-handed Gators trailed by 10 in the first half and faced a 44-36 deficit with 15 minutes left before chipping away.

“We weren’t losing the game,” Castleton said. “I mean that’s just what it comes down to. You've got to have a mindset of ‘We’re not losing this game.’ We don’t want to go back to Florida just yet.”

Payne was ejected from the SEC Tournament quarterfinals early in the second half for a flagrant-2 foul against Tennessee’s John Fulkerson. Fulkerson suffered a concussion and facial fracture and is uncertain for Tennessee’s opener against Oregon State.

Payne started eight of 23 games and averaged 3.7 points. White declined to say if he will allow Payne to play in the second round.

“It was the right thing to do. That’s it. Omar handled it like a champ. Omar's very remorseful,” White said.

The first NCAA Tournament game at Hinkle Fieldhouse in 81 years was rife with history, nostalgia and ... sunlight. A cloudless day had sun pouring in through the windows at the top of the arched, steel-truss roof. Windows on the concourse level along the South side of the building had shades pulled down to block the sun, but there were sunspots dotting the north end of the court.

The only previous NCAA Tournament action inside Hinkle occurred on March 23, 1940, when Indiana beat Duquesne 39-30 to win the East Regional.

The Gators will try and reach the round of 16 for the first time since 2017 facing No. 15 seed Oral Roberts. The schools have never met before.