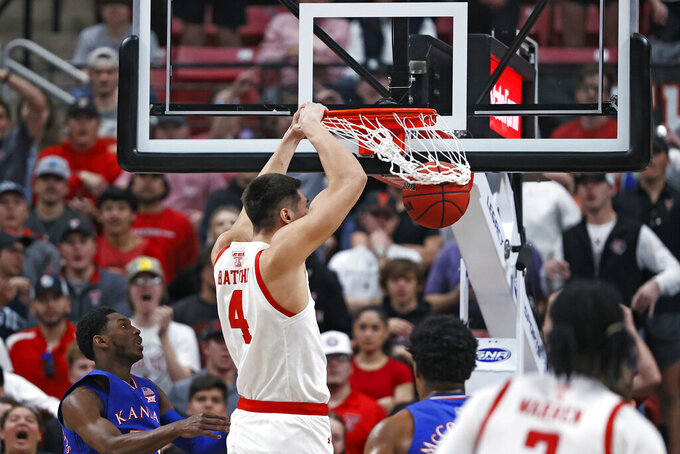 LUBBOCK, Texas (AP) — The defensive effort never wavers for No. 25 Texas Tech, meaning the Red Raiders can frustrate and beat teams even when they're missing their top two scorers.

Texas Tech (11-3, 1-1 Big 12) never trailed in the second half. Ochai Agbaji's 3-pointer with 1:12 left cut the Kansas deficit to four points, but Williams made two free thows and the Jayhawks didn't score again.

“I thought we were poor right from the jump. I don’t think we played as competitive as they did for 40 minutes, even though we had some good possessions,” Kansas coach Bill Self said. “We obviously didn’t have them prepared to go against a team that really, really tried hard.”

Three days after playing with only seven players in a 51-47 loss at No. 11 Iowa State, the Red Raiders got one more player back. But they still were without top scorers Terrence Shannon (14.3 ppg) and Kevin McCullar (13.5 ppg). Shannon missed his fifth game in a row because of lingering back spasms and McCullar got hurt in practice earlier this week.

Wilson scored the first seven points of the game for the Jayhawks and their last six before halftime, though the latter came over a span of more than seven minutes.

“We just really weren’t turned up,” Agbaji said. “Just not really being the aggressor. They were more the aggressor with their offense and kind of dictated what we were doing defensively. We were kind of just playing a step behind."

A layup by Wilson with 7:16 left in the first half gave Kansas its last lead at 21-19, and his jumper with 5:57 left tied the game at 23 before the Jayhawks missed their last seven shots before halftime.

A free throw by Williams put Tech ahead and then Nadolny had a steal from Agbaji that turned into a layup by Davion Warren.

“We just know that we’ve got to take care of business on the defensive side of the floor,” Williams aid. “Because that’s what wins games.”

Kansas: Agbaji managed to play 35 minutes even though he picked up his fourth foul with 13:05 left. Christian Braun had 10 points, with eight of those points coming in a span of 1:12 late, including a steal and breakaway dunk.

Texas Tech: Another strong defensive effort for the Red Raiders, who held Kansas to their season-low for points and one of their lowest-shooting percentages at 44.7% (21 of 47). “We started to play small ball, but we didn’t have many guards to play,” Red Raiders coach Mark Adams said. “Our bigs had to make up the difference and guard their guards and their smaller players.” ... After Agbaji made a 3 with 14:44 left, the Red Raiders had a 9-0 run for their biggest lead when Marcus Santos-Silva converted a three-point play to make it 51-37.

Texas Tech outscored Kansas 44-18 in the paint, which Wilson said was “horrible.”

“We should be focusing on defense with our length and our speed and stuff, but that should never happen. ... With our conference and guys we're going to play again, it’s not going to be acceptable, especially with the goals that we have," he added.

The Jayhawks were also outrebounded 33-24.

Texas Tech was the first ranked opponent for the Kansas this year. It was the fifth consecutive road loss for the Jayhawks when playing a Top 25 team, the longest such streak in Self's 19 seasons.

Kansas will likely stay in the top 10, and Texas Tech may move up in the poll with the win over the Jayhawks coming after a strong effort against the Cyclones.

Kansas: Home against No. 11 Iowa State on Tuesday night.

Texas Tech: Plays its third consecutive game against a top-11 team, at No. 1 Baylor on Tuesday night.