Shot Doc is out: Magee retires after 1,144 wins in Philly 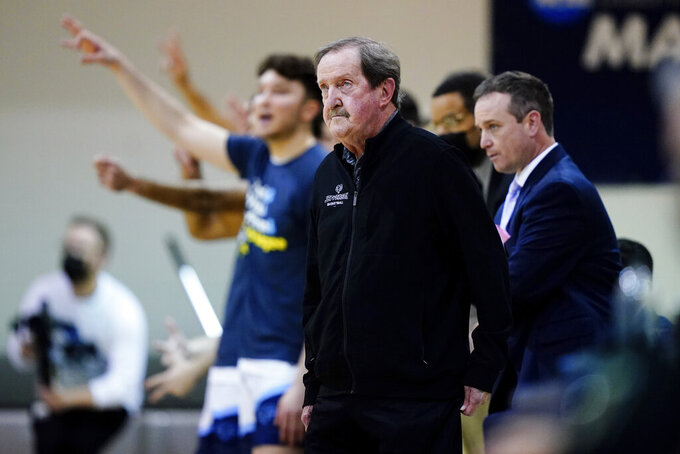 PHILADELPHIA (AP) — Herb Magee walked off the court of a Rams game for the 1,594th time and the last one where he was called coach.

Oh sure, clinics and speaking engagements for the famed “Shot Doctor” are ahead. So is a celebratory sendoff at an area cricket club for friends, family and former players keen on properly toasting Magee’s Basketball Hall of Fame career.

And yes, Magee is ready to set all the tee times as soon as the weather warms up.

But when the final horn sounded -- and the Thomas Jefferson University Rams’ season ended over the weekend with a loss in the conference semifinal -- Magee was hit with the realization that one of the great coaching careers at all levels of basketball was truly over.

There was no more game film to review. It was the last game where he could shake off a loss and tell himself he’ll get ‘em again next week, next month, next year.' It was the last time Magee would call the shots for the only program he’d worked as a head coach since the 1960s.

Magee, who turns 81 in June, spent the third day of his retirement still in wonder the Rams’ season had ended.

“I’m just trying to get over,” he said, “which I don’t think I ever will, the loss that we had in the conference semifinal.”

The career? So many wins that stretched beyond the final result over a 1,144-450 (.718 winning percentage) record in 54 seasons. He led the Rams to 31 NCAA Tournaments, winning records over his final 24 seasons, 38 20-win seasons and the 1970 Division II national championship. The Rams won 28 straight games that season and beat Tennessee State in the title game.

Only 28 and in his third season, Magee predicted many more titles ahead at the private Philadelphia university.

“I pine away for the guys that were on that team,” he said Tuesday. “That was some basketball team. They were so good. I actually made a statement after the game to a reporter, now keep in mind, I was like 28 years old, .. I said, ‘we’ll probably do that a lot.’ "

Maybe the next national title never came but the wins piled up. Magee stayed loyal to Philadelphia and turned down other more high-profile jobs outside the city over the next several decades. The Division II coach that could have easily been swallowed in a city home to six Division I programs instead made his own legacy as he topped some of the biggest names in all of coaching on the career wins list. He passed Bobby Knight with 903 wins in 2010 and now only Duke’s Mike Krzyzewski has more with 1,195. He also is set to retire after this season.

Magee will be honored at Philadelphia’s Coaches vs. Cancer event that fundraises against the disease and celebrates the city hoops community.

“I know he’s known and respected in the basketball circles,” Villanova coach Jay Wright said. “I don’t know nationally what people think of him. I can’t think of anybody in Philadelphia in the basketball circles that’s more respected. I think he’s up there with John Chaney and Harry Litwack and Paul Westhead. The Rollie Massiminos. I really think he is one of the all-time greats in Philadelphia.”

And one of the greats in college basketball. Magee was inducted in 2011 into the Naismith Memorial Basketball Hall of Fame.

Magee played for Jefferson -- when it was known as Philadelphia Textile and later Philadelphia University -- and ended his career as the school’s leading scorer with 2,235 points. He averaged 29.1 points one season and was a two-time, small-college All-America selection. The Boston Celtics drafted Magee with the 63rd pick of the 1963 NBA draft. He never played in the NBA. Magee broke two fingers on his left hand that summer, a big blow for a shooter, and he felt he couldn’t crack a Celtics roster that was stocked with future Hall of Famers.

So he went into coaching with the Rams. Basketball? Sure. Magee also took a job as an assistant varsity coach and the junior varsity coach. He also coached the school’s cross country team, golf team, taught physical education, and in his spare time he even ran intramurals.

When basketball coach Bucky Harris called it quits, the job interview for his successor went a little like this:

He went 21-6 in 1967-68 and the good times never stopped rolling, even as the players -- and the university's name -- changed. When Magee needed to pick the next Rams coach, he turned to friend and long-time assistant coach Jimmy Reilly, who's been a member of Magee’s staff since 2007.

Magee also earned a reputation as the “Shot Doctor,” tutoring pros like Charles Barkley, Jameer Nelson and Evan Turner. Even today Magee says he has perfect shooting form. He used to take 500 shots a day and would chart misses to figure out what he did wrong.

The Rams did not play last season because of the pandemic, and the hiatus convinced him he could live a full life with his wife, daughters and grandchildren — and golf — without the daily grind of the game.

So he called it a career, leaving an indelible stamp on the game, Philly hoops and the university he’s always called home.

“I know I’ll miss it,” he said. “I plan on getting down there to see the practices and watch games from afar.”