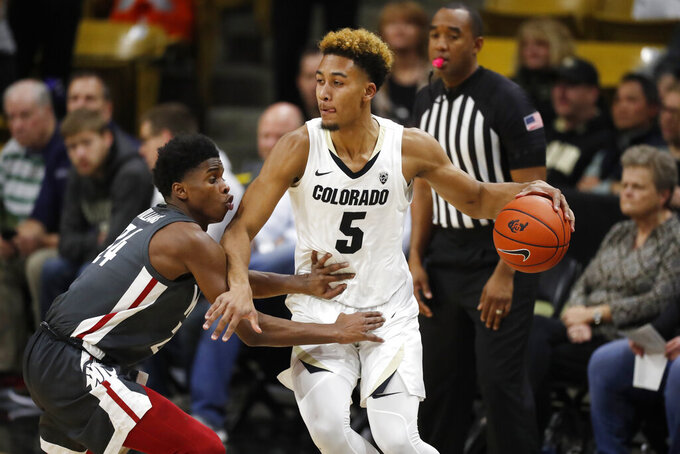 BOULDER, Colo. (AP) — Lucas Siewert and Evan Battey teamed up to hit the boards with a vengeance in the absence of Colorado's top rebounder, Tyler Bey.

Siewert had 16 points and 10 rebounds, and Battey added 12 points and 10 boards as No. 23 Colorado pulled away in the second half to beat Washington State 78-56 on Thursday night.

D'Shawn Schwartz scored 13 for Colorado (15-4, 4-2 Pac-12), which bounced back from a loss at Arizona last week. The Buffaloes outrebounded the Cougars 45-28 despite playing without Bey, the leading rebounder in the conference, after he injured his right hand in practice this week.

Bey, averaging 9.3 boards per game, was in uniform on the bench with his hand bandaged. Colorado coach Tad Boyle said while Bey could have played, he did not want to risk aggravating the injury.

"We tried to make it through without him and we did. Hopefully, Saturday (against Washington) we'll have him back," Boyle said.

It was the first time Bey had missed a game after a string of 75 consecutive starts, and it fell to Siewert, Battey and the rest of the team to pick up the slack.

"We knew Tyler averages nine-plus rebounds a game," Siewert said. "We weren't going to have those tonight, so Coach told me, even Tyler told me, to come out aggressive."

Colorado held Washington State to 37% shooting from the floor, and the scoring total for Washington State (12-8, 3-4) matched a season low. The Cougars lost to 65-56 to USC earlier this month.

CJ Elleby had 15 points to lead the Cougars. Daron Henson added 13 and Isaac Bonton scored 10 for Washington State, which fell to 0-9 in Boulder.

"We told our team that Colorado is the best home team in the country, and they proved it tonight," Cougars coach Kyle Smith said. "I thought we played pretty darn well considering we were in foul trouble. They tightened up their D late and forced us into some bad shots. They got on the offensive glass and they were just a little too much for us tonight."

Up by five at halftime, Colorado put together a 12-1 run midway through the second half to pull in front 66-51 with 6:49 remaining — its biggest lead to that point. Siewert and Maddox Daniels each connected on a 3-pointer during the surge.

Jervae Robinson stalled Colorado's momentum by finishing a fast break with a jumper, Washington State's first basket in more than six minutes. But the Buffaloes hustled down the floor and Daniels again connected from 3-point range to quash any hopes of a Cougars comeback.

Siewert had nine points in the first half, helping the Buffaloes take a 38-33 lead.

Washington State pulled to 54-50 on a 3-pointer by Bonton at the 12:12 mark of the second half but that was as close as the Cougars got the rest of the way.

"They went on a really big run to separate it. They were just a little more solid than us down the stretch," Elleby said.

McKinley Wright IV had 10 points and 10 assists, marking the first time three Colorado players had double-doubles in a game since Dec. 1, 2018, when Siewert, Wright and Bey did it against Colorado State.

Washington State: The Cougars had their best offensive showing of the season last time out in an 89-76 win over Oregon State but struggled to replicate the performance against Colorado's stout defense.

Colorado: The Buffaloes hit the boards on both sides of the floor and finished with a nearly 2-1 advantage in rebounds. Siewert and Battey each had a double-double.

Washington State: The Cougars seek their first win against Utah on Saturday night at the Huntsman Center, where they are 0-10 since 1969.