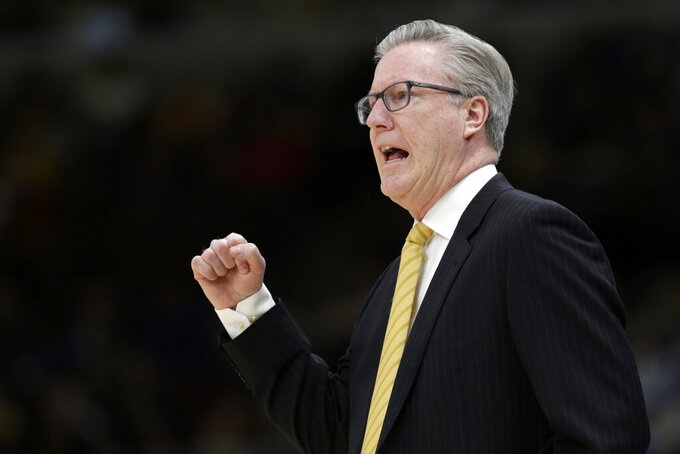 Iowa head coach Fran McCaffery directs his team during the first half of an NCAA college basketball game against Michigan in the quarterfinals of the Big Ten Conference tournament, Friday, March 15, 2019, in Chicago. (AP Photo/Kiichiro Sato) 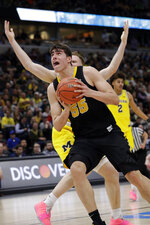 CHICAGO (AP) — Zavier Simpson was pretty much perfect, and everything fell into place for No. 10 Michigan.

Just another day at the Big Ten Tournament for the Wolverines.

Simpson sparked Michigan's balanced attack with 10 points and 11 assists, and the Wolverines rolled past Iowa 74-53 on Friday night.

Seeking its third consecutive Big Ten tourney title, third-seeded Michigan advanced to the semifinals for the fourth straight year. It will go for its third win against Minnesota this season when it takes on the surprising Gophers on Saturday afternoon.

"There's nothing intentional here. We're just trying to get better every day," coach John Beilein said. "I think if you go into tournaments and you're usually a team that doesn't beat itself during the season, maybe you have some success then."

It certainly helps to have a point guard like Simpson, who went 4 for 4 from the field and 2 for 2 at the line with just one turnover. The 6-foot junior also played tough defense on Jordan Bohannon, who was averaging 11.7 points before he went scoreless in almost 27 minutes against the Wolverines (27-5).

"We had a great look in our eye. We played good," Simpson said. "The key today was moving the ball. Guys can shoot, guys can score, guys can drive and penetrate. If we do that, we feel like we'll be in good position."

Michigan made 10 3-pointers and placed five players in double figures, bouncing back nicely from Saturday's disappointing loss to rival Michigan State. Ignas Brazdeikis had 15 points, and Jon Teske had 12 points and 10 rebounds.

Luke Garza and Tyler Cook each scored 14 points, but Iowa was ice cold from deep one night after it made 12 3-pointers in an 83-62 victory over Illinois. The Hawkeyes went 1 for 16 from beyond the arc against the Wolverines and shot 36 percent (21 for 59) overall.

"You've got to give some credit to our opponent for that, but typically we're not going to be a team that goes 1 for 16," coach Fran McCaffery said. "It changes the momentum shifts in the game."

Charles Matthews returned from a right ankle injury, and Michigan celebrated with an impressive offensive display. With Simpson calmly directing the show, the Wolverines put away the Hawkeyes with a 15-2 run in the second half.

Brazdeikis and Eli Brooks opened the decisive sequence with 3-pointers. Simpson fed Teske for a jam and then banked a little floater to make it 59-35 with 13:44 remaining.

"We weren't active on defense," Garza said. "They were getting wide-open shots. We just can't do that."

Matthews had five points on 1-for-9 shooting in his first game back after he got hurt against the Spartans on Feb. 24. The Chicago native got a huge ovation when he was introduced with the starting lineup.

"Without him, we're not the same team," Brazdeikis said. "I'm just super excited he's back. It changes everything for us offensively and defensively."

It was Michigan's ninth consecutive win in the Big Ten Tournament, snapping a tie with Ohio State for the longest such streak.

Iowa: Bohannon missed each of his two shots from the field, and Joe Wieskamp had just three points on 1-for-5 shooting. The Hawkeyes will need more from the two guards to make any sort of run in the NCAA Tournament.

Michigan: It was the type of efficient performance that makes Michigan a tough out every March. Led by Simpson, the Wolverines finished with 24 assists and seven turnovers. Isaiah Livers scored 13 points and Jordan Poole finished with 11.

Iowa waits to see where it's going in the NCAA Tournament.