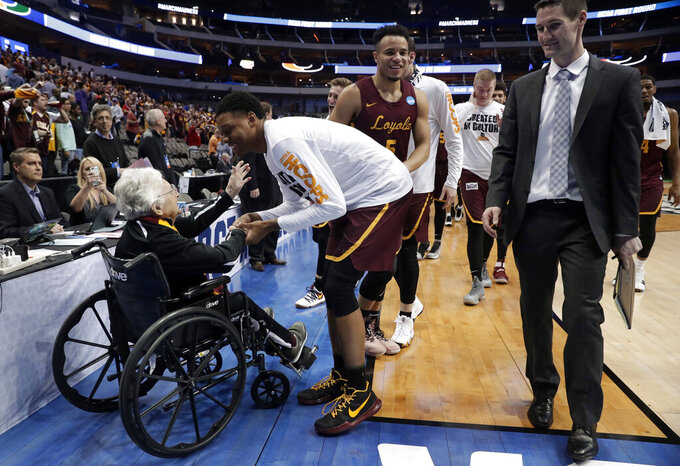 FILE - In this March 15, 2018, file photo, Sister Jean Dolores Schmidt, left, greets the Loyola Chicago basketball team as the Ramblers walk off the court after a win over Miami in a first-round game at the NCAA college basketball tournament in Dallas. Loyola Chicago is back in the tournament. And Sister Jean will be there, too. The 101-year-old team chaplain's lobbying paid off Tuesday, March 16, when the school reversed course and announced she will go. That means she gets to watch her beloved Ramblers in person for the first time this season when No. 17 Loyola meets Georgia Tech in Indianapolis on Friday. (AP Photo/Tony Gutierrez, File)

CHICAGO (AP) — Loyola Chicago is back in the NCAA Tournament. And Sister Jean will be there, too.

The 101-year-old team chaplain's lobbying paid off Tuesday when the school reversed course and announced she will go. That means she gets to watch her beloved Ramblers in person for the first time this season when Loyola meets Georgia Tech in Indianapolis on Friday.

Loyola made a surprising run to the Final Four, charming the nation with one last-second victory after another. Along the way, it shined a light on the 1963 team that broke racial barriers on the way to what remains the lone NCAA championship for an Illinois school.

Above all else, at age 98, Sister Jean became a celebrity, with national TV interviews and even her own bobblehead.

It was quite a ride. But it was not clear if she would be along — in person, anyway — this time.

Loyola (24-4) leaped into the AP Top 25 for the first time since March 1985 and hit the 20-win mark for the fourth year in a row. The eighth-seeded Ramblers come in with the nation's stingiest defense, allowing 55.5 points per game.

“This is what we've wanted,” Moser said. “We've wanted to sustain success. We wanted to get it back here. That's what drives us.”

Having Sister Jean along makes it a little sweeter.

She did not travel to St. Louis for the Missouri Valley tournament, which Loyola won for the second time in four years. Though she is fully vaccinated, there were safety and logistical issues, and it was the same with the NCAA Tournament.

“It was a little struggle going along the journeyed path," she said, "but I finally said to one of our executives, ‘You know, I’m just going to sound like the old woman in the Gospel who kept after the judge and after the judge for what she wanted. And finally the judge said, ‘Let her do what she wants.'”

Sister Jean acknowledged she has felt “lonely” not being around the team. It's been “very difficult” for her to watch games on TV because the facility she lives in doesn't have all the channels. Sometimes, she listens on the radio and follows the play-by-play online.

When she goes to Indianapolis, she will have a nurse and security with her and will eat in her hotel room. She's not sure where she'll be seated when Loyola meets ninth-seeded Georgia Tech at Butler's Hinkle Fieldhouse, one of a half-dozen Indiana venues being used to host the tournament, but she'll be safe.

She won't be allowed up-close contact with the Ramblers because teams are isolating. But just being there figures to be a boost.

After all, Loyola playing in the NCAA without Sister Jean just doesn't seem right. Had she not gotten the green light to go, Sister Jean had some backup.

“One alum wrote and told me that her husband was willing to drive me down,” she said. “Somebody else told me she was going to sneak me out of the university. And another couple said that they felt they would like to kidnap me and then Loyola would have to search for me. Loyola didn't know any of those things. I didn't tell them until after.”

No one will have to sneak out Sister Jean or kidnap her. She'll be there cheering on her Ramblers, just like in 2018, and that sure will be a welcomed change for her.

Sister Jean hasn’t been on campus since the start of the pandemic.

She starts work at 7:30 a.m. and tries to finish by 3:30 p.m. so she can watch Jeopardy. She keeps in touch with players through emails and leads the team in prayer before each game. She also gives Moser scouting reports.

As for this tournament?

Sister Jean has Loyola getting to the Elite Eight, knocking out top-seeded Illinois and Tennessee besides Georgia Tech, in her bracket. Her pick to win it all? Gonzaga.

“I'm just gonna be so excited when I get there,” she said. “It's a whole year since I've seen them play in a game (in person). I just want to see them. I've watched their videos and stuff like that. It's just gonna be like old home week to me, to see them again."