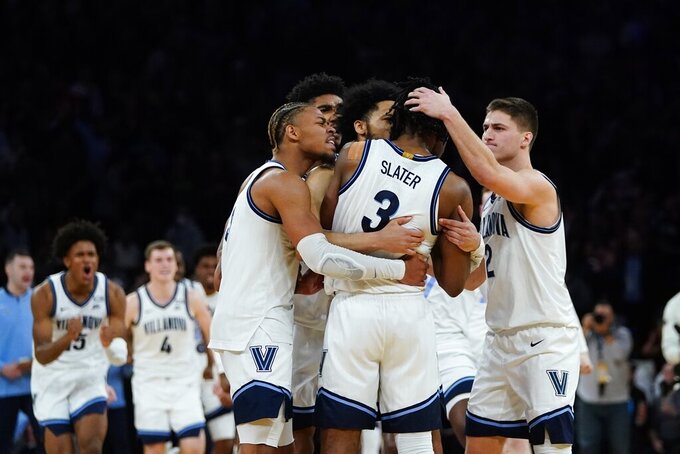 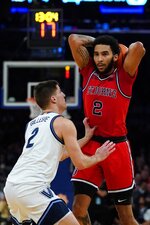 NEW YORK (AP) — After falling way behind, Villanova fought back and showed its championship pedigree.

St. John's reverted to form, too, coming up short in a close game.

That's why the Wildcats are still playing for prizes and the Red Storm are thinking NIT.

Brandon Slater made the go-ahead free throws with 2.8 seconds left and No. 8 Villanova barely squeezed into the Big East Tournament semifinals, overcoming a 17-point deficit in the second half to beat St. John's 66-65 on Thursday night.

“We knew coming into this game it was going to be this kind of game,” Villanova coach Jay Wright said. “We just toughed it out.”

Caleb Daniels scored 19 points for the second-seeded Wildcats (24-7), who will play 20th-ranked and third-seeded UConn on Friday night at Madison Square Garden. The Huskies shut down Seton Hall 62-52 in the last quarterfinal.

Justin Moore had 15 points and two-time conference player of the year Collin Gillespie added 14 for Villanova, nearly knocked out quickly for the second consecutive season. Last year, a top-seeded Wildcats team was upset in the quarterfinals by eventual champion Georgetown.

Julian Champagnie scored 23 points with nine rebounds and four steals in an excruciating defeat for the seventh-seeded Red Storm (17-15), resigned to hoping for an NIT bid after entering the season with NCAA Tournament aspirations.

“You saw a team that probably could and should have been NCAA. But this was our ticket to get in there,” coach Mike Anderson said. “I wish we would have come together a lot quicker in terms of guys understanding their roles.”

After blowing their big lead, the Red Storm went back ahead 65-64 when Stef Smith converted a three-point play with 2:08 left.

They had an opportunity to extend it, but Champagnie airballed a good look at a 3-pointer from the corner with 30 seconds remaining, and Villanova went inside on its final possession.

Jermaine Samuels, replaced by Daniels in the starting lineup due to back spasms, had a shot blocked and the ball stripped before Slater grabbed it and was fouled by Champagnie going up.

The senior forward knocked down both shots, and Smith’s try from halfcourt was wide at the buzzer as Villanova completed its largest comeback of the season.

“We work on free throws every day in practice," Slater said. “When I stepped to the line my teammates and coaches were like, `Hey, we do this every day.'”

Red Storm players pulled jerseys over their eyes after letting another big one slip away. St. John’s fell to 0-7 against ranked teams this season and 0-10 versus the top five seeds in this tournament.

“There's been a lot of these type of games where it’s close,” Smith said. “It comes down to just one play that changes the outcome of a win or a loss.”

St. John’s, an occasional thorn in Villanova’s side the past few seasons, scored the first seven points of the second half and opened with a 14-4 run to build its largest lead at 44-27 on point guard Posh Alexander’s 3-pointer — only his second since Jan. 5.

But the Wildcats, ice cold early, finally started hitting shots and responded quickly with an 18-2 spurt.

“They hung in there, hung in there, and I guess their experience kicked in gear at the end,” Anderson said. “We know a lead against a Villanova team in the second half, they’re going to make a run. They’ve been there, they've done that.”

Early in that stretch, Alexander went to the bench with his third foul at the 14:05 mark and the Red Storm up by 14. By the time he returned with 10:25 left, the margin was down to one following Slater’s three-point play.

“He’s a big part of their team. I thought that was really big," Wright said.

Alexander checked out again after getting called for his fourth foul with 8:11 remaining, and two free throws by Daniels gave the Wildcats their first lead at 51-50.

"Upperclassmen down the stretch,” Wright said. “Just proud of these guys.”

Champagnie scored 22 of his 26 points in the first half of Wednesday night’s blowout win against DePaul and started strong in this one, too.

The junior forward had 13 points and seven rebounds before the break, and the Red Storm used a 9-0 run to build a 12-point bulge before taking a 30-23 lead into halftime.

Villanova went 7 of 30 from the field (23%) in the first period, committed eight turnovers and didn’t manage a single point in the paint.

“This conference is as good as it's ever been this year. We just knew St. John’s was really good," Wright said. "We weren’t down. We weren’t disappointed with how we played at half down seven.

“We just got out of sync a little bit.”

St. John's: After six straight quarterfinal appearances, St. John’s still hasn’t reached the Big East semifinals since winning the 2000 tournament — hard to believe considering the event is held on one of its home courts.

“I think everybody can see our faces. It’s rough. I feel like the guys, we gave it our all,” Champagnie said. “It’s just hard.”

Villanova: Before losing to Georgetown last year, the Wildcats had won three consecutive Big East Tournament championships and four of the past five. They're looking to regain their familiar perch atop the conference.

Villanova split two games against UConn in February, with each school winning at home.