A small school with big expectations: No. 23 St. Bonaventure 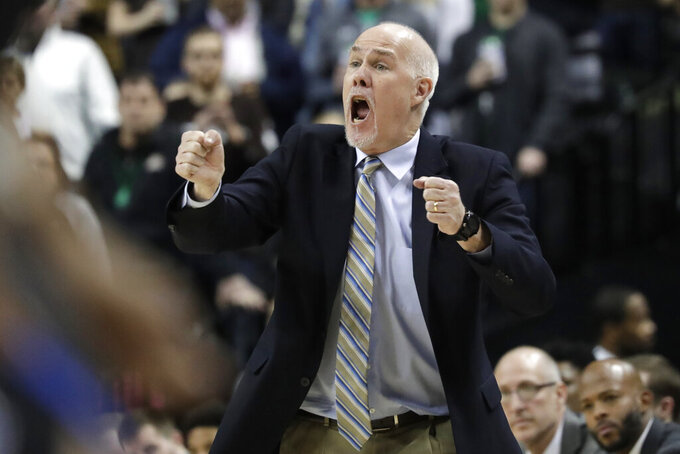 FILE - St. Bonaventure head coach Mark Schmidt reacts during the first half of an NCAA college basketball final game against Saint Louis in the Atlantic 10 men's tournament, Sunday, March 17, 2019, in New York. No. 23 St. Bonaventure is ranked for the first time in 50 years and returns five seniors -- all starters -- from the team which went 16-5 and lost to eight-seeded LSU in the first round of the NCAA Tournament last year. (AP Photo/Julio Cortez, File) 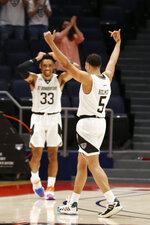 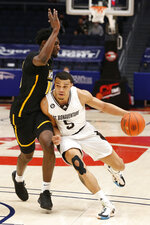 Upon arriving at one of the lowest points in St. Bonaventure men’s basketball history, coach Mark Schmidt never doubted the potential of putting the small school tucked in the shadows of southwestern New York’s Allegheny Mountains back on the national map.

The Bonnies, after all, had a lustrous tradition. It was Eddie Donovan’s last stop before he took over coaching the New York Knicks in 1961. It’s where Bob Lanier played in leading the school to an NCAA Tournament Final Four berth in 1970. And then there was the 1977 team which won four games, all by four points or less, to claim the NIT title.

In taking over a program still reeling from the effects of a recruiting scandal under former coach Jan van Breda Kolff in 2003, and the 24 combined wins over four seasons under Anthony Solomon that followed, Schmidt vowed better days were on the horizon.

“I took the job because it wasn’t a graveyard. They had won in the past, and why can’t we win again?” he said last month. “And that was the challenge. That’s why I came to try to rebuild this thing.”

With three NCAA Tournament and one NIT berth under his belt already, Schmidt enters his 15th season at Bona with expectations at their highest.

At No. 23 in the preseason poll, the Bonnies are ranked for the first time since January 1971. They return five starters — all seniors, who represent 89% of their offense last year. And St. Bonaventure is coming off a year in which it went 16-5 to win both the Atlantic 10 Conference regular season and tournament titles for the first time in school history and earned its highest NCAA Tournament seed before losing to eighth-seeded LSU in the opening round.

Having been the underdog for so long at a school with the A-10's second-smallest enrollment, Schmidt’s new challenge is ensuring his players don’t get caught up in their press clippings as the Bonnies prepare to open their season Tuesday hosting Siena of the Metro Atlantic Athletic Conference.

“I know everybody’s excited. At the same time, as I told our players, it’s only a preseason poll and just crumble that piece of paper up and throw it in the basket,” Schmidt said. “The games are won on the court.”

What gives him confidence the players will maintain their focus is the team’s veteran makeup.

“I’d be much more concerned if we had a young team,” Schmidt said. “If we don’t have this season that everybody’s talking that we may have, it’s not going to be because the kids got lazy or big-headed. They’re going to work just as hard. And we have been since the LSU game.”

The Bonnies feature a four-guard, one center starting lineup in which all five averaged double figures in points last year. They also play a tenacious style of defense, which ranked fifth in the nation last season in limiting opponents to an average of 60.4 points a game.

Guard Jaren Holmes said there was no anticipation the Bonnies would be ranked and took the news in stride.

“When we go out there and play, we don’t have the No. 23 on our shoes,” Holmes said. “We’re all happy deep down inside, but we know we have a job to do. We know we have goals to accomplish.”

The Bonnies are in position to become the A-10′s first school to repeat as tournament champion since Temple’s three-year run from 2008-10, and first to repeat as outright regular-season champs since Saint Louis in 2013 and ’14.

Schmidt anticipated higher expectations by putting together a challenging non-conference schedule in which the Bonnies will face Connecticut, Virginia Tech, Boise State, and Buffalo. They’re also entered in the Charleston Classic, where St. Bonaventure could potentially meet West Virginia and Clemson.

“Our guys deserve to play this schedule and let’s see how good we are,” Schmidt said.

One distinct advantage the Bonnies have will be playing home games at the ever-raucous Reilly Center after fans weren’t allowed to attend last year because of COVID-19 restrictions.

It’s an experience guard Jalen Adaway enjoyed wearing street clothes on the bench while sitting out the 2019-20 season after transferring to St. Bonaventure from Miami.

“It’s something you can’t really put into words,” Adaway said. “We’ve been working as hard as possible, and we’re ready for it. We have something that’s going to be really exciting.”