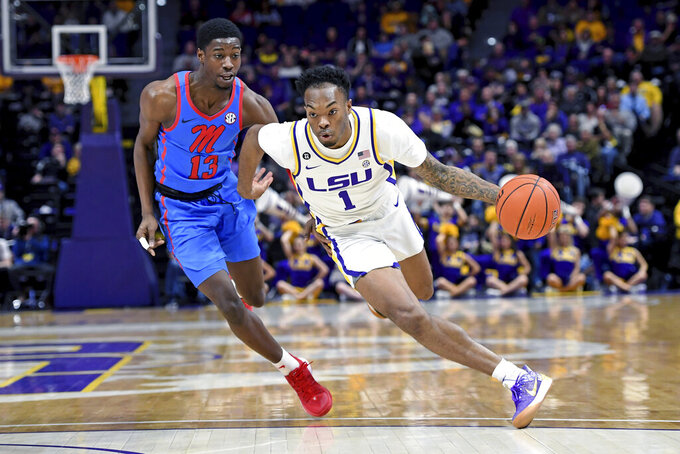 BATON ROUGE, La. (AP) — LSU guard Javonte Smart inbounded the ball to himself off the back of Mississippi's Carlos Curry under the Ole Miss basket and immediately scored as Curry fouled him.

LSU coach Will Wade said the play wasn't designed, but certainly lived up to the surname of the player who pulled it off at a time when the Tigers were trying to stunt the Rebels' momentum in the second half.

“Just a really, really smart play for the and-1,” Wade said. “That was a big sequence.”

Smart scored 13 of his season-high 21 points in the last 16 minutes, and No. 22 LSU extended its winning streak to 10 games with a 73-63 victory over struggling Mississippi on Saturday.

Smart “was very, very aggressive. Our team did a good job of giving him space to operate,” Wade said. "He did a great job of forcing the action and getting downhill.

“He's not the best morning person,” Wade continued, alluding to the 11 a.m. local time tip-off. "So, for him to get up at 7 a.m. and be running around and going full speed like he was, that was a good sign that it was probably going to be a good day.”

Marlon Tayor had 13 points and 11 rebounds and freshman Trendon Watford scored 13 points for LSU (17-4, 8-0 SEC), which is off to its best start in conference play in 39 years.

“They got us in every facet early,” Ole Miss coach Kermit Davis said. "Our team is a work in progress. We’re disappointed but we’re not discouraged. Kind of a reset year and we’ll get it fixed. I really like what LSU is doing and they’ll win a lot of games.”

These teams met two weeks earlier in Oxford, with the Tigers pulling out a four-point victory in which Ole Miss guard Breein Tyree scored a career-high 36 points.

LSU looked determined not let the rematch come down to a ending, breaking the game open with an early 25-2 run for a 32-11 lead. The Tigers opened up a 24-point advantage when Watford scored his 11th point on a free throw that made it 40-16 before Ole Miss cut it to 40-20 at halftime.

Tyree was held scoreless in the first half and finished with nine points.

“They just got on top of Breein," Davis said. "His energy level has to stay high when he’s not making shots. ... LSU was physical with him, did some timely switching, and when that happens you have to make other players better.”

Ole Miss briefly rallied back within single digits by scoring the first 12 points of the second half, which amounted to a 16-0 run that made it 40-32.

The game leveled off after that, however, and Smart helped LSU gradually rebuild its lead to 21 with just less than seven minutes left. Smart was 7-of-12 shooting without attempting a 3 and was 7-of-9 on free throws.

“There was a lack of energy coming out of halftime. They had some big shots,” Smart said. "We just try to bring the energy to bring the team back up.”

Taylor also was instrumental in holding off the Rebels with 12 second-half points, hitting two 3s to go with his usual soaring dunks. LSU's Emmitt Williams blocked four shots to go with nine points and seven rebounds.

Mississippi: While the Rebels could take some satisfaction form getting back in the game in the second half, their early hole proved too deep for a team that shot just 35.6%. Ole Miss' Khadin Sy scored nine of his 11 points in the second half, but was one of just two Rebels with as many as 10 points.

LSU: A Tigers team that spent most of this season unranked has now become historically significant at LSU. The last time the Tigers won their first eight SEC games was 1981, widely considered the best season in LSU history. That team went to the Final Four, losing to eventual national champion Indiana in the national semifinals. Meanwhile, LSU improved to 83-0 since the 1966-67 season when leading by 20 or more at halftime.

LSU commemorated the 50th anniversary of late Hall-of-Famer Pete Maravich setting the all-time NCAA scoring record. That game also was played against Ole Miss at LSU, in an arena known as the Cow Palace on Jan. 31, 1970. LSU now plays in a stadium that opened in 1973 and was renamed the Pete Maravich Assembly Center shortly after his death in 1988.

Maravich broke Oscar Robertson's record of 2,973 points that had stood since 1960 and finished his three-year career (not including his season on the Tigers' freshman squad) with 3,667 points during an era with no shot clock or 3-point line. No player has come within 400 points since.

At halftime, Maravich's former teammates joined his wife, Jackie McLachlan, and son, Jaeson, for an on-court ceremony in which the family was presented a plaque and commemorative basketball as a packed crowd stood in applause. The stadium video boards also played Maravich highlights, including his record-setting basket.