With a smile for mom, Minnesota's Curry returns from injury 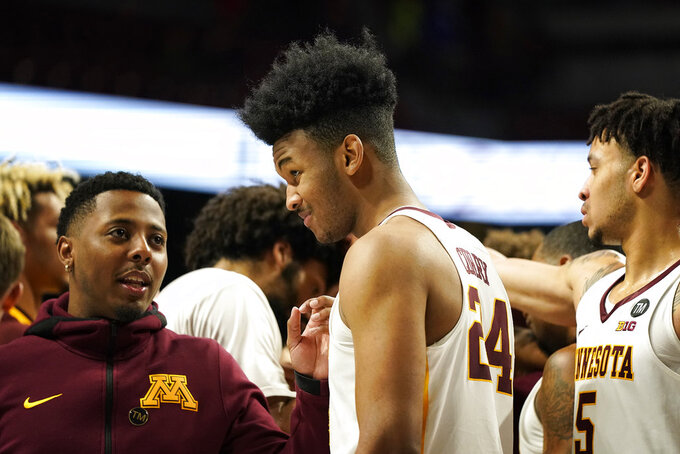 Minnesota's Eric Curry (24) joins the team for a huddle after their win over Mount St. Mary's in Minneapolis, Sunday, Dec. 30, 2018. When Curry entered the team's last game, the sophomore had a big smile on his face. He was thinking about his mom, who predicted the standing ovation after helping him through nearly two years of knee rehab.(Leila Navidi/Star Tribune via AP)

MINNEAPOLIS (AP) — When Eric Curry entered Minnesota's most recent game, his first live action in 654 days, he carried a wide smile with him onto the court .

This was the look of satisfaction by a player whose injured left knee kept him on the sideline for all of last season and 12 games into this one. This was also the expression of appreciation for his mother, Audrea Phipps, and all of her support through the arduous rehabilitation process.

"She told me a couple of weeks before, 'Whenever your first game is, I think they're probably going to give you a standing ovation,'" Curry said. "I didn't believe that. Why would they do that? It's me just playing."

True to her prediction, the crowd at Williams Arena on Sunday for Minnesota's win over Mount St. Mary's loudly cheered Curry as he checked in early in the first half for the first time since the Gophers lost to Middle Tennessee on March 16, 2017, in the NCAA Tournament.

"I was imagining her watching the game," Curry said. "It was going through my head that she was probably crying right now."

The 6-foot-9, 240-pound Curry, who was seventh on the team in points and minutes per game and third in rebounding as a freshman, had four points and six rebounds in 17 minutes in his debut .

"There was no pain. It was me just getting my groove back. It's a little sore, but I'm good though," Curry said, later adding: "You question your knee, and it's going to be in my head until I get over that hump. I feel like I'm close."

Now comes the hard part, with a game at 22nd-ranked Wisconsin on Thursday thrusting the Gophers (11-2, 1-1) back into Big Ten play.

"We hope to prove that we belong in the top four," Curry said. "We want to show we are one of the best teams in this league. We feel like we get overlooked a lot with our record being what it is, so we want to come out and make a statement."

After tearing the ACL, MCL and meniscus in the knee in a pickup game on Aug. 31, 2017, Curry had reconstructive surgery and took a redshirt last season. Then on Oct. 29, eight days before the opener, he had an arthroscopic procedure done to address persistent swelling. He was supposed to be back in four to six weeks, but he needed almost nine weeks for medical clearance.

"I started getting down on myself a little bit, but my teammates and coaches and trainers kept my head up high," Curry said.

So did his mom, of course.

"She helped me a lot. She called me every day trying to check on me, make sure I'm good," Curry said.

The Gophers mourned with senior guard Dupree McBrayer , whose mother, Tayra McFarlane, died of cancer last month. The moms behind these players can be such important pieces to their success, and their connections to the program have clearly given coach Richard Pitino a lift, too. Pitino's voice cracked up in his postgame remarks about McBrayer and his McFarlane on Dec. 5, when the Gophers beat Nebraska. He spoke warmly of Phipps, who raised Curry and his sister in Memphis, Tennessee, and Little Rock, Arkansas, where Curry went to high school at Southwest Christian Academy.

"She's a character. I love her. She's one of my favorites. Very, very loyal. Very passionate. She's always quick to send me a very positive text, which you don't get a lot from parents," Pitino said, adding: "I've told her over and over and over again, 'Listen, nobody's going to rush him back. We'll make sure he's in good hands. You can trust us.' And she's been great with that."