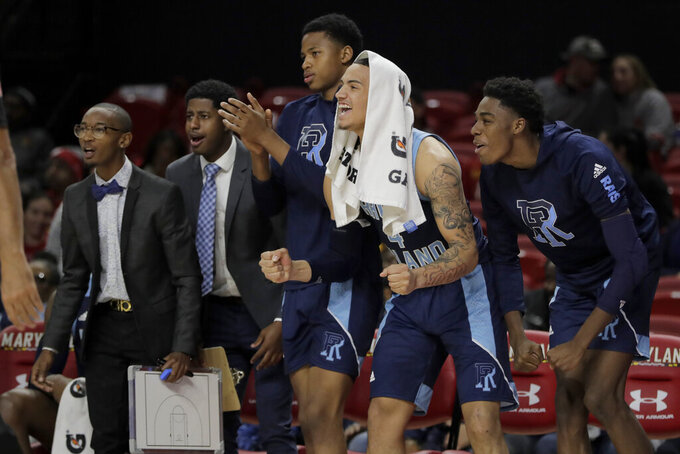 Rhode Island guard Tyrese Martin, second from right, reacts with teammates on the bench during the first half of an NCAA college basketball game against Maryland, Saturday, Nov. 9, 2019, in College Park, Md. (AP Photo/Julio Cortez) 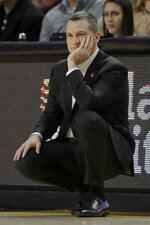 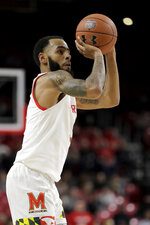 COLLEGE PARK, Md. (AP) — Maryland switched its defense and steadied its offense in the second half Saturday to overcome a scare against Rhode Island.

Jalen Smith had 19 points and 11 rebounds, Anthony Cowan Jr. scored all 14 of his points in the second half and turnover-prone No. 7 Maryland overcame a sloppy start and a double-digit deficit, beating Rhode Island 73-55.

Eric Ayala added 13 points and Aaron Wiggins (13 points, 13 rebounds) posted his first career double-double for the Terps, who trailed 24-12 with eight minutes left in the first half, but ultimately breezed to a 2-0 start with a dominant second half.

"We were panicking a little bit — let's just be real," Maryland coach Mark Turgeon said. "There was a lot of energy in the building, and maybe that had a little bit to do with it. I tried to play a lot of guys early and some of the young guys weren't quite ready for the pace and physicality of that game. We were just out of sync."

Jeff Dowtin led the Rams (1-1) with 14 points, while Cyril Langevine had 17 rebounds.

Maryland committed 14 of its 17 turnovers in the first half, allowing Rhode Island to lead for more than 18 minutes. But Wiggins' 3-pointer less than a minute before the break secured the Terps a 35-32 lead.

"We just have to adjust as the game goes," Ayala said. "We realized we were turning the ball over, and in the second half we were better at slowing the ball down."

The Rams had turnover issues of their own, especially after Maryland moved out of its usual man defense. Turgeon plans to play more zone this season, but he did not unveil a 1-3-1 look in either the Terps' exhibition game or their season opener against Holy Cross.

It proved a timely choice Saturday, as the Rams had 13 of their 18 turnovers in the second half.

While the Rams briefly tied it early in the second half, Maryland controlled the final 20 minutes. Cowan scored nine points in a row for the Terps during one stretch, and his layup with 10:52 to go gave Maryland its first double-digit lead at 53-42. Rhode Island never got any closer.

The Terps also used their defense to ignite the other end of the floor, especially with Wiggins stationed at the top of the zone. The sophomore has three steals in both of Maryland's games so far after reaching that total just once all of last season.

"Coach put it in because he loves our length and he loves our athleticism," Wiggins said. "Putting that 1-3-1 in, we saw it kind of messed with them a little bit. I used my length and just tried to affect the guards who were handling the ball up top. I was able to get a few steals, Ant got a big steal. That fast break, it kind of changed the game for us."

Maryland improved to 4-1 all-time against the Rams, claiming the teams' first meeting since 2015.

Rhode Island: The Rams were picked fourth in the Atlantic 10, and their first-half showing at Maryland suggests they could be a handful for anyone in their conference. The same is true of their ambitious nonconference schedule, which includes Alabama, Louisiana State, Providence and West Virginia.

Maryland: Turnovers have haunted the Terps in recent years, and the return of that problem after committing only eight in Tuesday's season opener against Holy Cross is a concern. Expect that to be a focus in the coming week as Maryland goes seven days between games.

With a pair of victories in the season's first week, Maryland is unlikely to drop when the next poll is released Monday.