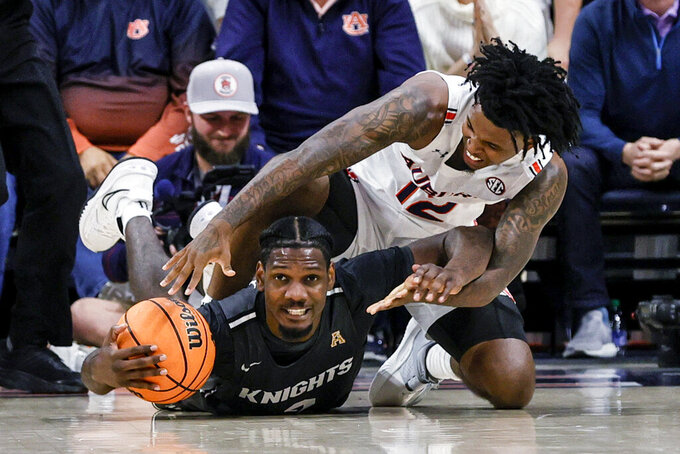 Central Florida guard Darius Perry, left, and Auburn guard Zep Jasper (12) compete for the ball during the first half of an NCAA college basketball game Wednesday, Dec. 1, 2021, in Auburn, Ala. (AP Photo/Butch Dill)

AUBURN, Ala. (AP) — Walker Kessler and freshman Jabari Smith had big games on offense and Auburn turned up the defensive intensity in the second half.

Auburn (6-1), which won two of three last week at the Battle 4 Atlantis in the Bahamas, held UCF (4-2) without a field goal for nearly nine minutes to take control in the second half.

The Tigers led by three points at halftime, and coach Bruce Pearl told his team it was getting outhustled.

“Coach’s biggest point was they were playing harder than us, playing with more energy than us,” Smith said. “He came into the locker room fired up. That fired us up, and I feel like we came out in the second half with a lot more energy.”

Darius Perry led UCF with 18 points but also committed eight turnovers. Cheikh Mbacke Diong had 10 of his 11 points in the first half while C.J. Walker had 10 points and seven rebounds.

Leading scorer Darius Green Jr. was held to eight points, half his season average. Brandon Mahan was 1-of-10 shooting for five points after Pearl challenged his team to contain Perry, Green and Mahan. In this case, two out of three wasn't bad.

He said the Tigers' “guards took the challenge seriously.”

“I just thought we wore them down defensively,” Pearl said. "Our depth was a factor.”

Kessler, a 7-foot-1 North Carolina transfer, did just about everything except make one of his three 3-point attempts. He had two steals.

Kessler laughingly attributed his performance to “just being tall and playing hard.”

It goes well beyond that, Smith said.

“He’s just being Walker," the freshman said. “This really doesn’t surprise me. It’s just really what we expect of him.”

UCF missed 11 consecutive shots during a 1-of-15 stretch that saw the game get away.

Auburn led 39-36 at the half and didn't build its lead to double digits until midway through the second half, when Wendell Green Jr. buried a 3-pointer from well beyond the arc to beat the shot clock.

Johnson hit two free throws and then stole the ball and took it in for a reverse dunk to give Auburn a 64-49 lead with 8:41 left.

UCF didn't manage to cut into it much from there.

“Our team played a really solid first half,” Knights coach Johnny Dawkins said. "Whenever you’re on the road and playing in a game of this magnitude, it’s tough.

"We got some good looks tonight and knocked down some shots. Our guys got into our offense really well. I thought our press was very effective in the first half.”

Auburn thrived in the second half after four games away from home. The Tigers had eight dunks and 11 layups while making 10 3-pointers.

First-year Knights assistant coach Mamadou N’Diaye played for Auburn from 1997-2000 and was one of the program's better shot blockers. N'Diaye played for four NBA teams in five seasons after getting drafted 26th overall by the Denver Nuggets in 2000.