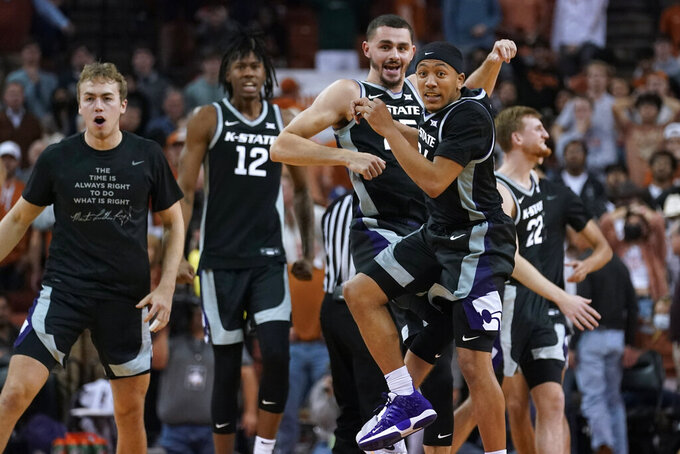 AUSTIN, Texas (AP) — Kansas State finally is at full strength, and the Wildcats are eagerly making up ground.

The Wildcats (10-7), hit hard by COVID-19, lost their first four Big 12 games. But with the roster restored, they beat No. 18 Texas Tech on Saturday before coming to Austin.

“I'm just thrilled for our guys,” coach Bruce Weber said. “It gives us another mark on the resume.”

Marcus Carr scored 19 of his season-best 25 points in the second half for Texas but missed a jumper with 2 seconds left, one of Texas' two chances to take the lead in the final minute. Courtney Ramey also misfired on a potential go-ahead jumper as Texas missed its last four shots from the field.

Pack finished with 16 points and Mike McGuirl added 13 for Kansas State, which closed the game with a 6-0 run.

Timmy Allen scored 15 points for Texas (13-5, 3-3), and his layup with 3:32 left put the Longhorns ahead 65-60. But he missed two free throws with 2:26 left and Texas leading 65-62. Markquis Nowell followed with two free throws for the Wildcats after Smith retrieved his missed 3-point attempt.

The game was tied at 55 when Texas’ Christian Bishop blocked a driving attempt by Nowell. Carr followed that play with consecutive mid-range jumpers, giving the Longhorns a four-point lead.

Texas led 35-31 after a first half in which both teams got into foul trouble. Each was whistled 12 times. Texas had five players with two fouls while Kansas State had four.

Smith, a rugged 6-foot-4, 225-pound guard who played at Illinois and Missouri before Kansas State, was too tough inside for Texas to handle. He hit 5 of 7 shots in the first half, helping the Wildcats stay in the game.

Thanks largely to Smith, Kansas State finished with a 28-16 scoring advantage in the paint

Kansas State had a 13-7 edge in second-chance points. The Wildcats finished with 23 fouls, three more than Texas.

“They turned the game into a street fight,” Texas coach Chris Beard said. “And we’re willing and able and capable and more than excited to be in a street fight.”

However, Beard added: "We had some players on our team tonight that looked like they kind of got punched in the face few times. We gotta be a lot more aggressive.”

The Wildcats, meanwhile, are working to salvage their season.

“Even though we lost a couple of games in the beginning, we were gaining confidence,” Smith said. “We knew we could be better. We never got down when we lost those first four games.”

Kansas State: The Wildcats earned a split with Texas for the regular season. They were without Weber, two starters and a top substitute because of COVID-19 issues during a 70-57 home loss to Texas on Jan. 4, while the Longhorns were missing Andrew Jones.

Texas: Beard has said he expects the Longhorns will become a good 3-point shooting team, but they continue to struggle. They missed 13 of 17 against Kansas State and are hitting 31% in Big 12 play.

“We can’t get emotionally drunk because Kansas is coming in,” Weber said. “We gotta have the same self-discipline and play the right way if we are gonna have a chance to beat another great team.”

Texas: Hosts Oklahoma State on Saturday. The Cowboys beat the Longhorns 64-51 on Jan. 8 in Stillwater.