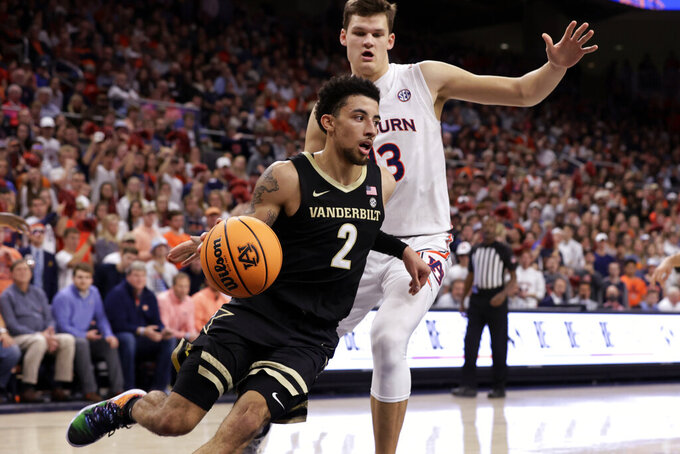 AUBURN, Ala. (AP) — Auburn freshman Jabari Smith left a strong impression on Vanderbilt coach Jerry Stackhouse, even if the young forward wasn't all that dazzled by his own hot shooting.

Smith scored a season-high 31 points and made seven 3-pointers to lead No. 2 Auburn to a 94-80 victory over Vanderbilt on Wednesday night. It was the most points by a Tigers freshman since Toney Douglas had 32 in 2005.

“There wasn’t anything to it,” Smith said. “I just got hot a little bit.”

More than a little bit.

The 6-foot-10 Smith did most of his damage from outside. He was 7 of 10 from 3-point range, launching over defenders and making most of them.

“He’s such a good catch-and-shoot player,” said Stackhouse, a former NBA standout. “He’s as good as advertised. There’s no doubt he’ll be one of the first two or three picks in the draft this year and he really stepped up and showed why.”

It was close most of the way but Vandy had no answer for Auburn's two star big men.

Kessler handled much of the work inside. He blocked seven shots and had seven rebounds while shooting 8 of 10 in a follow-up to his second triple-double of the season.

Auburn also got 12 points, nine assists and seven rebounds from Wendell Green Jr. But it was Smith who kept firing away after a cool start.

“Obviously, Jabari was spectacular,” Tigers coach Bruce Pearl said. “You can see what an amazing jump shooter he is. I think he missed his first two and we just kept on yelling to him to keep shooting it.”

The Commodores got off to a great start, scoring the first 11 points — with a technical against Pearl as a bonus. The Tigers closed the gap with Smith's 12 straight points.

They didn't take their first lead until the final minute of the first half but went into the locker room up 42-38.

Smith hit three 3s early in the second half to help Auburn keep up that momentum and eventually build a 20-point lead.

The Vandy coach went with three big men, starting graduate transfer center Liam Robbins for the first time. Robbins had played in only three games and totaled one point coming off a foot injury but scored seven against the Tigers.

But the Commodores couldn't keep up with the former No. 1 team in the nation.

“They feed off turnovers and bad shots, and I think that’s what allowed them to come back into the game,” Pippen said. “Jabari Smith took a lot of tough shots but he made them and his teammates fed off that and the fans fed off that.”

Vanderbilt: Hung close with another top team much of the way, just as the Commodores did in single-digit losses to No. 4 Kentucky and No. 16 Tennessee. But the outcome was another loss and ultimately not a particularly close one.

Auburn: Has struggled against some unranked teams lately and did early in this one, but the Tigers looked unstoppable in stretches. They made 11 of 22 3-pointers and shot 31 of 53 (58.5%) overall.

Auburn visits Florida, which has lost two straight, on Saturday.