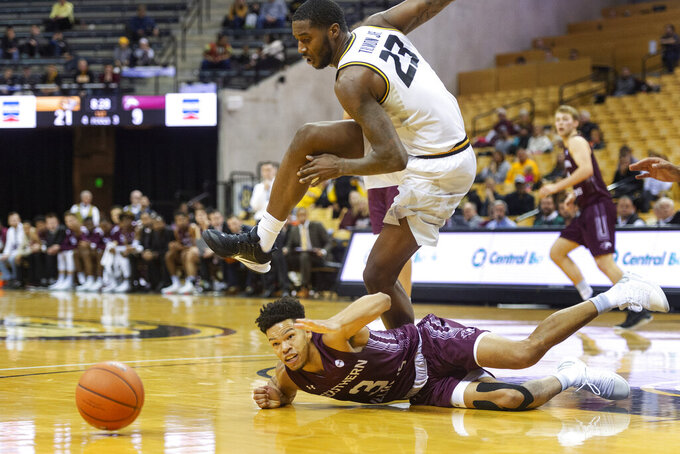 Missouri's Jeremiah Tilmon, top, leaps over Southern Illinois' Ronnie Suggs, bottom, as they battle for the ball during the first half of an NCAA college basketball game Sunday, Dec. 15, 2019, in Columbia, Mo. (AP Photo/L.G. Patterson) 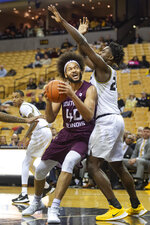 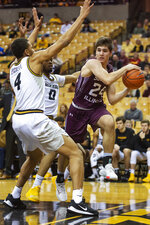 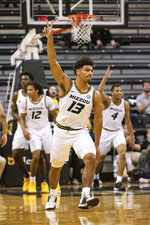 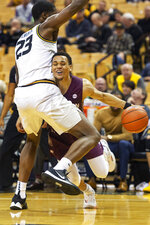 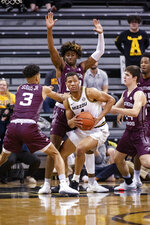 COLUMBIA, Mo. (AP) — Mark Smith wasn't surprised he scored a season-high 23 points to lead Missouri to a 64-48 victory over Southern Illinois on Sunday. He felt so good in pregame warm-ups, he knew something big was coming.

“But I always think that,” he admitted.

Smith, a junior guard, has never questioned himself despite an up-and-down start to the season. Smith led the Southeastern Conference in 3-point accuracy last year, shooting 45%. He entered Sunday's game making 35.1% of his 3s, but he made 7 of 9 shots from beyond the arc against the Salukis.

Mark Smith broke open a close game midway through the first half by hitting four straight 3-pointers. On the last one, he pulled up on a fast break and kept his right hand extended as the ball swished through the net, giving Missouri a 21-9 lead and forcing a Southern Illinois timeout.

“We had him down as their best shooter and the guy we couldn't leave,” SIU coach Bryan Mullins said. “That was disappointing to see.”

McGill hit a 3-pointer at the buzzer to cut Missouri's lead to 33-22 at halftime.

“They had a lot of length on the perimeter, and that bothered our offensive execution,” Mullins said. "We’ve got to do a better job of playing downhill. We were playing east-west too much today.”

PRODUCTIVE IN THE PAINT

Missouri didn't exploit its size advantage offensively, with 6-foot-10 starting forwards Jeremiah Tilmon and Mitchell Smith combining for six points. But the Tigers did score 28 points in the paint by sending guards cutting through the lane to score around the basket. Pickett, in particular, has become more productive by attacking the basket.

“With Jeremiah, when teams send a double-team, they send it different ways — from the top, off the passer, from the bottom," Martin said. "We try to do a lot of things to show him looks, so you have multiple guys cutting. Javon’s one of those guys that’s a willing cutter, because he knows he can benefit from it.”

Southern Illinois: Ronnie Suggs scored four points in his return to the arena he called home for the last two years. Suggs began his career at Bradley, transferred to Missouri as a walk-on after his sophomore year, sat out one year per NCAA rules and then played in 27 games for the Tigers last season. He moved on to Southern Illinois as a graduate transfer for this season. Suggs missed the first four games because of injury but has started the last seven.

Missouri: With a winter storm dropping snow, and the students out of town on holiday break, Mizzou Arena was almost empty and hushed Sunday. The atmosphere will be dramatically different on Saturday when Missouri and Illinois fans will fill the Enterprise Center in St. Louis for the annual Braggin' Rights rivalry game. The Tigers ended a five-year losing streak against the Illini last year.

Southern Illinois: The Salukis play Hampton on Wednesday at home.

Missouri: The Tigers play Illinois on Saturday in St. Louis.