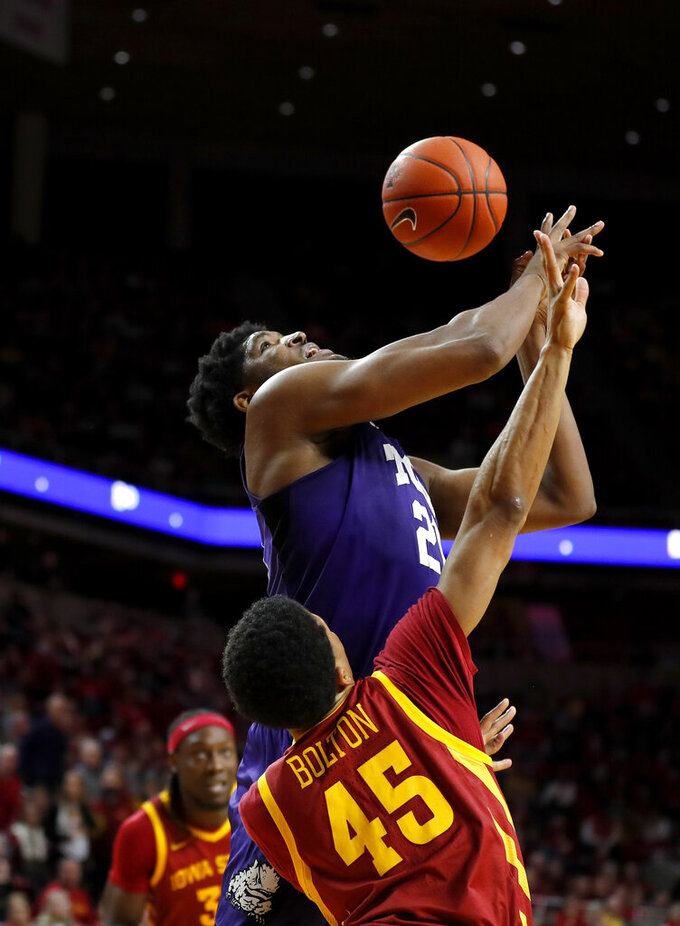 Jackson — who had been wearing the protective gear since breaking his nose a month ago — scored a career-high 18 points and the Cyclones outlasted the Horned Frogs 65-59 at Hilton Coliseum.

Solomon Young scored 20 points to lead Iowa State, which made a concerted effort early in the game to pound the ball into the paint.

“I just tried to stay active," the 6-8 junior forward said. “Tried to get in position, get angles and score when I got the ball and make good decisions.”

“It's a blow," said Horned Frogs coach Jamie Dixon, whose team scored four points in the final five minutes. "He’s an experienced guy. I felt we came out and played with some fight. We just didn't get it done to the level we need to.”

“Just being confident and just letting it fly,” Jackson said of his first double-digit scoring effort since notching 12 points in a Jan. 11 win over Oklahoma. “I know I can shoot the ball, just got to be confident. That's it.”

TCU: The Horned Frogs were outscored in the paint (28-18) for the eighth time in the past 12 games and fell to 0-8 on the road in Big 12 play. TCU shot just 33% (9 of 27) in the first half, but turned the tables on Iowa State in the second half, limiting the Cyclones to 33% shooting during its comeback effort.

Iowa State: The Cyclones rebounded from their worst home loss in Hilton Coliseum’s nearly 50-year history — an 87-57 rout Saturday against Texas Tech. They notched their fifth win in the past seven home games despite scoring just 24 points in the second half.

TCU had nine offensive rebounds in the second half — and six in the first four minutes after the break. Bane grabbed six of those, including three on one possession that helped key a 10-0 run that quickly cut Iowa State’s 16-point halftime lead to seven points.

“We needed this one. I told our guys we're playing for fourth place. If we win the game we're in fourth place. We didn't get done and I didn't like how we did it.” — TCU coach Jamie Dixon