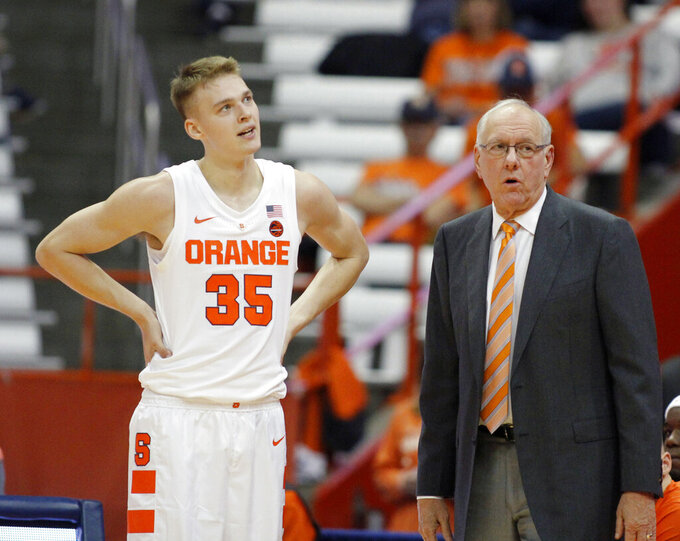 FILE - In this Oct. 31, 2018, file photo, Syracuse head coach Jim Boeheim, right, talks to his son Buddy Boeheim, left, during the first half of an NCAA college basketball game against Le Moyne in Syracuse, N.Y. With five freshmen on the roster this year and his dad counting more on him than most probably anticipated, he's delivered. Syracuse travels to Virginia Tech on Saturday, Jan. 18, 2020. (AP Photo/Nick Lisi, File) 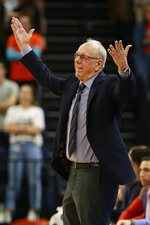 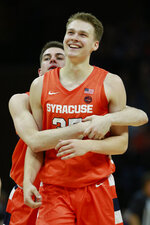 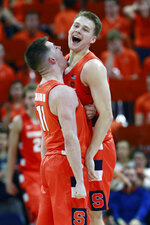 SYRACUSE, N.Y. (AP) — With the shot clock about to expire in an overtime game on the road against the reigning national champions, Syracuse guard Buddy Boeheim curls far behind the arc on the right wing. He barely glances at his target, then launches a shot over the outstretched arms of a Virginia defender.

In it went off the glass, producing wide smiles all around as Syracuse outlasted the Cavaliers 63-55 last Saturday in perhaps a pivotal game during a tough season so far for the youthful Orange (10-7, 3-3 Atlantic Coast Conference) and Buddy's dad, coach Jim Boeheim. Syracuse lost to Virginia 48-34 earlier this season.

“The confidence has been there for me this year,” Buddy said. “I think that’s something I really have worked on. Compared to last year, I’d miss a couple of shots and not be as aggressive.

"It’s always staying confident and having my teammates believing in me and making plays for me means everything. When a couple of shots go, you’re in a rhythm.”

With five freshmen on the roster this year and his dad counting more on him than most probably anticipated, he's delivered. Syracuse travels to Virginia Tech on Saturday.

The 6-foot-6 sophomore, who wears No. 35 just like his dad did for the Orange in the 1960s, is averaging 35 minutes, shooting 41.1% on 3-pointers and averaging 15.7 points, second on the team to Elijah Hughes. At midweek, Buddy's 62 3-pointers put him at the top of the ACC and he was second by just one among Power Five players. (Isaiah Joe of Arkansas had 63 on 25 more attempts).

Buddy has made seven 3s in a game twice this season, six twice, and five once, and was ranked seventh nationally in 3-point ﬁeld goal average (3.65).

“He’s out there to shoot," said coach Boeheim, who characterized the overtime heave at Virginia as a lucky one. "If we had another shooter to come in, it would be different. It’s unfortunate that he’s my son because people will say, ‘He’s playing his son’. No, I’m playing the best shooter ... so he’s going to be out there.”

The routine is simple — catch and shoot in the blink of an eye. Buddy's had a ringside seat to study the best shooters in the game — Klay Thompson, James Harden, Steph Curry — thanks to his dad's job as an assistant for more than a decade to Mike Krzyzewski on the U.S. National Team.

Along with countless hours of practicing and training to get stronger, it's all coming to fruition.

“He's just always wanted it," said Boeheim, in his 44th season. "He would come home from a strength workout or high school practice and he would shoot for an hour or an hour and a half after that. He's just always had the desire to be the best player he can be. He's worked extremely hard to get here.”

As a rookie last season, Buddy was happy just to fit in being the coach's son and settled into a role off the bench. But once ACC play began, he morphed into a threat from the perimeter and finished the season shooting just under 44% (39 of 89) from beyond the arc in the league.

With the departure of the Orange's backcourt after last season, the adjustment to starter has gone well, along with having a short memory after those off nights. In losses to Virginia, Oklahoma State and Iowa early in the season, he shot a combined 3 of 20 from behind the arc. In each of the games following those poor performances, he rallied to shoot a combined 12 of 26 from long range.

His coach also wanted him to develop a better all-around game, and it's starting to show. In a 76-50 victory against Boston College on Wednesday night, Buddy was 4 of 7 beyond the arc and 5 of 10 inside it, including consecutive drives in the first half. He finished with 22 points.

“I think this game was my best game overall on offense,” Buddy said. “I was really finishing around the rim. I think that’s more important than making 3s for me right now.”

His teammate Hughes, who added 19 points, likes the changes.

“He's talking on defense, he's being more active,” Hughes added. “It's probably really hard playing for his dad, but he's used to it at this point. He's a tough kid.”

Buddy is quick with a smile that belies a competitive edge. That attitude was already there more than 15 years ago when mom Juli carted Buddy and older brother Jimmy to the old YMCA in downtown Syracuse on Saturday mornings to learn to play the game.

“He's got an edge about him, he's got a toughness about him,” Notre Dame coach Mike Brey said. "He wants to take big shots. Not everybody's got DNA like that. I guess it's natural that he would, given the bloodlines.

"I know that's probably a tricky dynamic. I never coached my son. But when your son's really good and he's tough and he delivers, it's a lot easier to coach your son. Buddy has done that for Jim.”