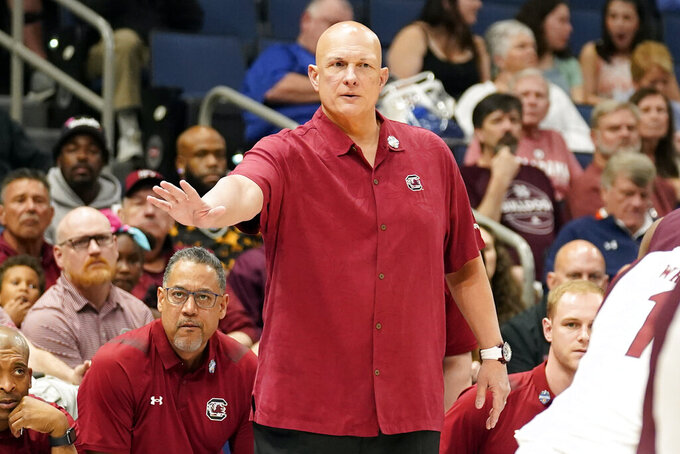 COLUMBIA, S.C. (AP) — South Carolina has fired coach Frank Martin after 10 seasons with just one appearance in the NCAA Tournament.

Martin completed his 10th season with an opening game loss to Mississippi State in the Southeastern Conference Tournament. The Gamecocks finished the year at 18-13, the seventh .500 or better season in the past eight for Martin's clubs.

Tanner said in a statement the expectation is for the Gamecocks is “to compete for Southeastern Conference and national championships.”

He said he plans to hire a coach with a winning history and the “energy, passion and commitment to excellence.”

Martin did not immediately reply to messages from The Associated Press.

Martin leaves with a 171-147 mark at South Carolina, including a 79-99 record in the regular season.

His greatest season came in 2017 when he led the Gamecocks to the Final Four. It looked as if the team was poised to continue that rise, but has not been back to the NCAA Tournament since.

Martin's future with the team was in doubt last spring after a 6-14 season. However, he and the school agreed to a two-year contract extension in 2021 where he did not receive a raise.

Martin has been criticized by some for his sideline shouting and fiery, scowling demeanor. In his second season at South Carolina, he was suspended a game for shouting profanities at one of his players.