Sports in 2020: Disruptions aplenty, only constant was loss 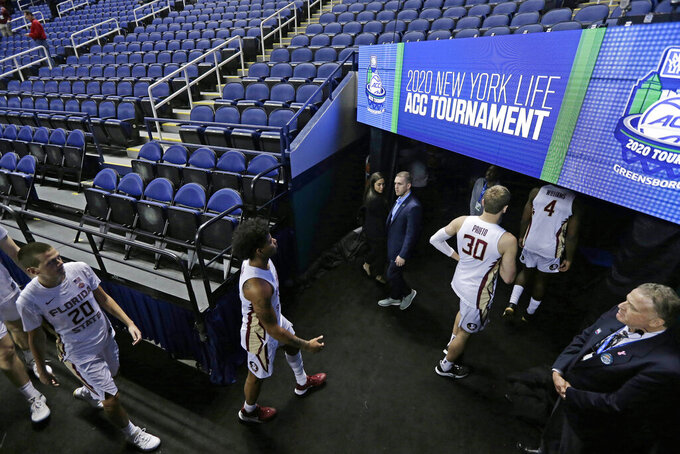 2020 reminded us that the show mustn’t always go on. Disrupted by the coronavirus, sports stopped cold three months in and then started up again in emptied-out stadiums, stumbling, skidding and finally staggering across the finish line — all the while shadowed by loss.

Celebrations were muted, crowd noise was piped-in and dozens of games were canceled at the last minute even as the sports industry hemorrhaged jobs. Facing increasingly long odds, some mega-events — the Olympics, March Madness, the Boston Marathon and Wimbledon — pushed the starting line into 2021. Those were hardly the only dislocations.

Kobe Bryant was killed in a helicopter crash in late January, and the toll of beloved figures we mourned kept mounting — Diego Maradona, Don Shula, John Thompson and Bob Gibson, among others — until Phil Niekro passed away two days after Christmas. But those moments of unity lasted only so long. Straining under the combined weight of a pandemic and a nationwide reckoning on race, the last few bricks in the wall between sports and politics crumbled and fans and athletes quickly chose sides — take Naomi Osaka, for one, who used her U.S. Open-winning run to speak out on racial injustice.

Time will tell what was won or lost by playing on. Toronto Raptors coach Nick Nurse experienced both, but wasn’t sure which memories would prove lasting. Easier to settle was what he missed most: everything that goes on around the games themselves.

“The ‘electricity’ in the streets on game day, the tremendous buzz in the city,” said Nurse, who won NBA coach of the year honors, but saw his team’s chances to repeat as champions squashed by the Celtics in Game 6 of the Eastern Conference semifinals. Technically that was a “home” game, but it was played in the nearly-empty NBA “bubble.”

“We certainly missed that (energy),” he added.

Stretched between public health concerns and a worsening economy, leagues and teams scrambled to innovate and return to play. With access to robust COVID-19 testing and deeper pockets than most businesses, some sports gathered players in isolated spots — like the NBA’s use of a sports complex at Walt Disney World in Florida — while others attempted to restore some semblance of home-and-away normalcy.

It worked for nearly all of them, but just barely. The Denver Broncos ran out of healthy quarterbacks at one point in the NFL season and the San Francisco 49ers called Arizona home as the coronavirus surged in California late in the season. Preparations to rush back college football and basketball games were so inconsistent from one program to the next, the schedules might as well have been written in invisible ink.

Germany’s Bundesliga took advantage of their countrymen’s successful effort early in the pandemic and became the first big leaguers on either side of the Atlantic back on the pitch. Even less surprising, its perennial champion, Bayern Munich, beat PSG in the Champions League final, claiming the first major team sports title of the COVID-19 era.

“It was a difficult situation, playing without fans, without atmosphere in the stadium,” said Bayern scoring ace Robert Lewandowski.

“It wasn’t just the specific nature of football. It was also in our private life. This was something new,” he added. “We didn’t want it, nobody did.”

Bayern players celebrated afterward like a team that won a rec league championship, not one of soccer’s grandest trophies. Whatever joy they felt — relief might be more accurate — was tempered knowing the 2020-21 season would kick off barely two weeks later.

Of course, not every champion or their fans celebrated that responsibly. After Liverpool ended a 30-year drought with an English Premier League title in June, some 2,000 fans gathered outside Anfield stadium and set off enough flares to turn the night sky red. Police made no attempt to disperse the crowd.

“It was mostly good-natured,” explained constable Rob Carden. He heaped even more praise on the “overwhelming majority of fans that recognized now is not the time to gather together to celebrate and chose to mark the event safely.”

Try telling that to Los Angeles Dodgers’ slugger Justin Turner. Pulled during the deciding game of the World Series because of a positive COVID-19 result, Turner ran back out on the field for the after-party, hugging teammates and posing for photos without a mask on.

He subsequently apologized, but defended his “mindset” in that moment: “Winning the World Series was my lifelong dream and the culmination of everything I worked for in my career.”

Now imagine just-as-hungry and even-younger athletes winning one of the more than 300 gold medals handed out, which is one reason why the Tokyo Olympic organizing committee took a pass on 2020. It marked the first time the Games, sports’ biggest global event, had been postponed or canceled for something other than war.

“It’s a bummer,” said teenage Swedish pole vault world record-holder Armand Duplantis. “But you have to understand the situation, understand that some things are a little bigger than sport.”

LeBron James said as much moments after he and the Los Angeles Lakers wrapped their hands around the NBA championship trophy. James was one of the principals in a growing movement that saw athletes loudly and visibly pushing for social justice reforms like never before. He considered leaving the NBA bubble when the Milwaukee Bucks nearly shut down all of sports again in August by refusing to play a scheduled game after Jacob Blake, a 29-year-old Black man, was shot in the back by police in Kenosha, Wisconsin.

“We know we all want to see better days,” James said. “When we leave here, we got to continue to push that. … Continue to push (against) everything that’s the opposite of love.”

If only for a moment, the pandemic receded into the background.

“If we can continue to do that, all of us,” James concluded, “America would be a much better place.”