Sportsbooks are dark and odds are long in Las Vegas 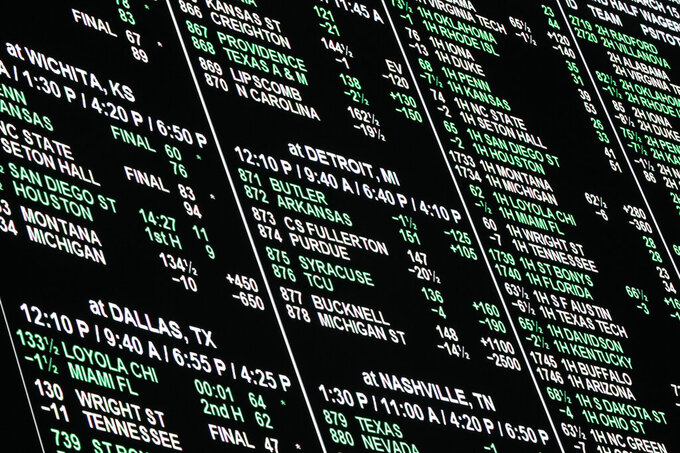 FILE - In this March 15, 2018, file photo, a board displays odds for different bets on the NCAA college basketball tournament at the Westgate Superbook sports book in Las Vegas. The sports books are closed, and the only things left to bet on mobile apps are virtual racing and Russian ping pong. (AP Photo/John Locher, File)

LAS VEGAS (AP) — Nobody would have given odds on this.

Inside the glittering casinos that line the Las Vegas Strip, the slot machines were turned off and the sportsbooks were dark. On what would have been the biggest Monday of the year for bookies, not a dollar changed hands.

No big national championship game bets, no wagers on Tiger Woods to win the Masters. No sports means no action, even for the most hardcore gamblers.

About the only thing degenerate sports bettors could do was go online and find a Russian table tennis match to put their money on.

“Russian pingpong has stolen the show,” said Nick Bogdanovich of the William Hill betting chain. “You can’t even find it streaming anywhere to watch, but people are betting on it.”

It was only weeks ago that sportsbooks were looking forward to their biggest March Madness ever. With sports betting exploding across the country, records would likely have been set at the betting windows and Monday’s scheduled title game would have drawn tens of millions of dollars on both sides, no matter which teams were playing.

Oddsmaker Jay Kornegay would be in the middle of it all at the Westgate Las Vegas, one of the most popular sportsbooks to watch March Madness. But the massive hotel, like all others in Las Vegas, is closed because of the new coronavirus and the huge televisions in the sportsbook are dark.

“It’s very eerie, something you would never think you would see in your lifetime,” Kornegay said. “Sometimes it hits you real hard when you’re walking through the hotel and you don’t see a soul. I can walk through the entire property and not see one human being.”

Just how much is bet on the NCAA Tournament is not clear because Nevada gambling authorities don’t break the figure out. But bettors wagered $495 million on basketball in March last year in Nevada alone, and the Final Four weekend itself draws big action.

While all the city’s sportsbooks are closed, a few like William Hill are still taking bets online. That means searching for sports that are still going on and might tempt bettors to make a wager or two.

Russian table tennis is the surprise hit, but sumo wrestling has been getting some action, too. There’s also virtual NASCAR racing, with William Hill taking about 400 bets on Sunday’s race at virtual Bristol Motor Speedway, won by William Byron.

“We lost a little on that, but at least we wrote some tickets,” Bogdanovich said. “It helped me get through an hour and a half of the day, for sure.”

At the South Point hotel, they’re not even bothering with that. Oddsmaker Jimmy Vaccaro said it didn’t make much sense to offer betting online when only obscure sports in faraway places are available to wager on.

Instead, Vaccaro is hunkering down at home, running an occasional errand, and waiting for the day when bettors with handfuls of cash stand in line again and debate with the person behind them on whether to lay the points in the national title game.

For now, though, there isn’t much to talk about, even for the normally voluble bookie.