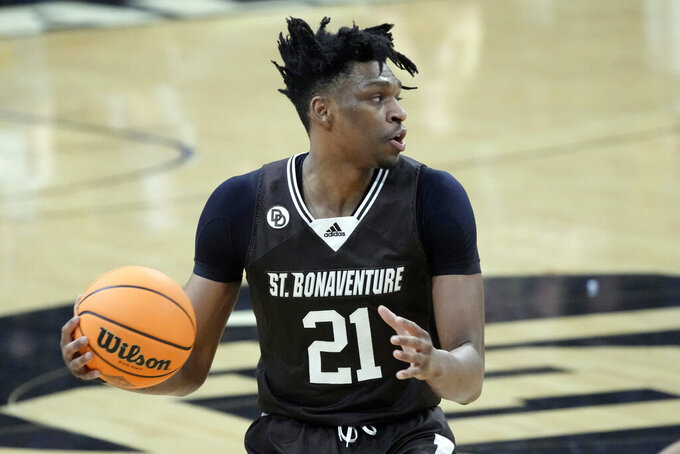 FILE - St. Bonaventure forward Osun Osunniyi (21) looks to pass during the first half of an NCAA college basketball game in the first round of the NIT on March 15, 2022, in Boulder, Colo. The two-time Atlantic 10 defensive player of the year announced on Friday, May 13, 2022, that he's transferring to Iowa State. (AP Photo/David Zalubowski, File)

The 6-foot-10 Osunniyi averaged 11.3 points and 7.5 rebounds and ranked eighth nationally with 2.94 blocks. He has one season of eligibility.

Osunniyi is the Bonnies’ career blocks leader and was a member of the Atlantic 10 all-defensive team four straight years. He blocked at least one shot in 29 of 31 games, including 19 with three or more.

Osunniyi is the second former St. Bonaventure player to transfer to Iowa State. The other is guard Jaren Holmes, who was the Bonnies' second-leading scorer.

Other transfers joining the Cyclones are Hason Ward (VCU) and Jeremiah Williams (Temple). Tre King transferred from Georgetown during the season and will be eligible for 2022-23.