St. John’s pulls away from UMass in Tip-Off Tournament 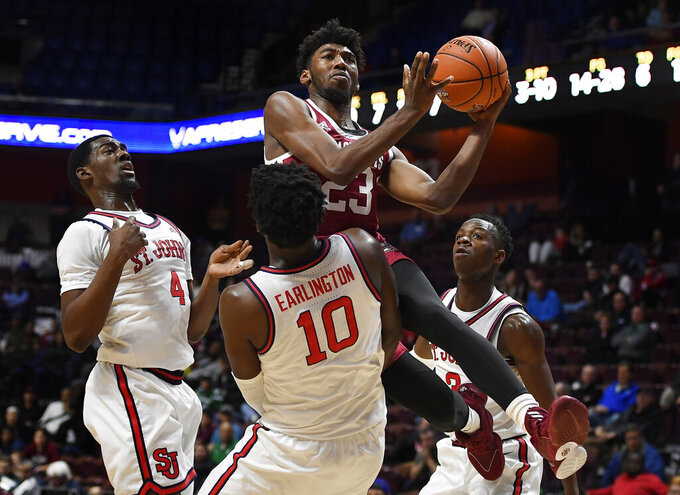 After trailing for the first time all season at the half, the Red Storm (5-2) dominated the final 11 minutes of play to avoid losing to their second mid-major school of the season.

The Red Storm did it with second-leading scorer Mustapha Heron on the bench with four fouls. Heron took a seat after picking up his second straight offensive foul with 15:50 left in the half and didn’t return.

Weeks scored 17 first-half points to give UMass a 38-37 lead. The Minutemen made just two field goals in the final five minutes of the half — 3-pointers from Clergeot and Mitchell — but went 4-for-4 from the foul line. Weeks made a pair with 31 seconds left to give them the halftime lead.

A three-point play by Rasheem Dunn gave St. John’s a 31-25 lead with just inside six minutes to play but were outscored 13-6 from there. Roberts had a team-high eight points in the half for the Red Storm.

UMASS: After averaging 78.4 points during a five-game winning streak to start the season, the Minutemen have struggled for points in two straight losses, averaging just 54.5 per game.

St. John’s: For the third straight season, the Red Storm finished third or better in an early-season tournament with the consolation game victory.

UMASS: The Minutemen continue their stretch against major programs with a Friday trip to Rutgers.

St. John’s: The Red Storm return to New York where they have five straight home games, starting with Wagner on Saturday.