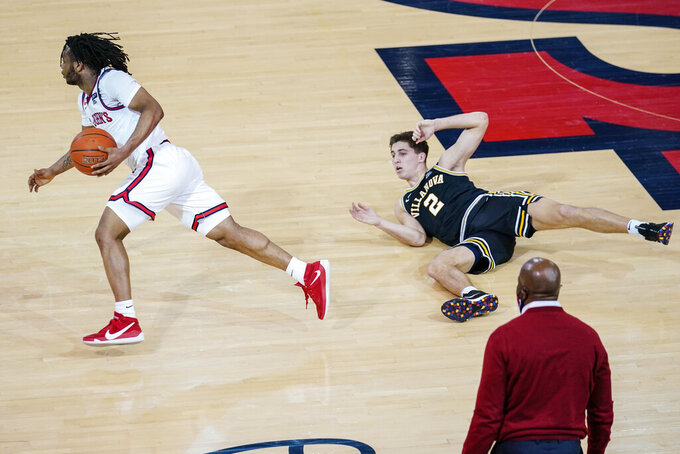 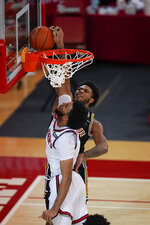 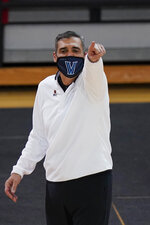 Just outside Carnesecca Arena, students cheered so loudly from their dorms that jubilant players could hear them in the locker room.

It was that kind of night for the suddenly surging Red Storm.

“I let them see another side of me,” a smiling Anderson said.

Julian Champagnie had 14 points — all in the second half — and a career-high 13 rebounds for the rising Red Storm (12-7, 6-6 Big East), who have won five straight games and six of seven.

This one, Champagnie said, showed they are “a legit team.”

And now, maybe one with a legit shot at an NCAA Tournament push.

Flashing quick and active hands all over the court, St. John's turned up its pressure defense and hounded the experienced Wildcats (11-2, 6-1) into 17 turnovers and 32% shooting in an ugly performance.

“I thought our defense was the catalyst,” Anderson said. “It was the Johnnies' night.”

Villanova was held 12 points below its previous season low for its first loss since Nov. 28 to Virginia Tech in overtime. The Wildcats went nearly four weeks between games because of coronavirus issues before returning with a Jan. 19 win over Seton Hall.

“I think the press was what we expected. I think our response was what I didn't expect,” Villanova coach Jay Wright said. “They really took us out of what we wanted to do.”

St. John's has been a surprising thorn in Villanova's side recently, with wins over a top-ranked Wildcats team in February 2018 and against the defending national champions in 2019.

The latest victory gave St. John's its first four-game Big East winning streak since the 2014-15 NCAA Tournament team. Three of the wins have come on the road, too.

Alexander, who plays with a relentless frenzy and leads the Big East in steals, added six assists, four rebounds and three thefts.

“He had a phenomenal night,” Anderson said. “He plays all out, both ends of the floor.”

Alexander dominated his critical matchup with senior star Collin Gillespie, who was 0 for 8 from 3-point range and committed six turnovers in a forgettable four-point performance.

With a little under seven minutes left, Alexander stripped Gillespie at midcourt and coasted in for an uncontested dunk that gave St. John's its largest lead at 58-41.

Gillespie entered with 12 turnovers all season while playing 35 minutes per game and averaging 15.5 points. The Wildcats came in averaging only 8.3 turnovers, best in the country.

St. John's, third in the nation at 9.9 steals per game, finished with eight and also blocked seven shots to help produce an 18-8 edge in fast-break points.

“They're a really good team. I don't think their record does them justice,” Robinson-Earl said. “They play really hard. ... They were a really tough team defensively.”

Villanova scored the first seven points of the game, but St. John's opened the second half with a 15-4 blitz to build a 14-point lead with 13:30 remaining.

The pandemic has put all St. John's home games on campus with no fans permitted, so this marked the first time Villanova played at 5,602-seat Carnesecca Arena since January 1994. The teams normally meet at Madison Square Garden, where St. John's usually plays many of its high-profile games. Villanova is the most frequent opponent in program history.

Wright recalled visiting as a Villanova assistant and watching high school playoff games in the building. He talked to his team about what to expect.

“These guys, I didn’t even know if they knew where it was or anything," Wright recounted Tuesday. "So I said, `Just so you know, we’re going into a tough, tight arena that they press in and they can make it really tough for you. I don’t want you being surprised when we don’t roll up to The Garden.'”

Villanova was the first top-5 opponent to play in the Queens gym since St. John's lost 72-71 to No. 2 Syracuse in February 1980, the first season of the original Big East. The last time St. John's beat a top-3 team on campus, Sonny Dove had 28 points and 24 rebounds in a 1966 win over No. 3 Saint Joseph's during Hall of Fame coach Lou Carnesecca's first season at the helm.

Villanova was supposed to host Xavier on Sunday, but that game was postponed Tuesday because of COVID-19 issues in the Musketeers' program and replaced Wednesday with a home game against Georgetown that had been slated for Feb. 17.

Wright acknowledged Tuesday that coach Mark Few of top-ranked Gonzaga, also freed up this weekend and eager to test his West Coast Conference team, had called about potentially setting up a No. 1 vs. No. 3 showdown on Super Bowl Sunday.

“Oh, definitely. He does all the time. He’s the master scheduler,” Wright said. “But I told him, I said: `Our priority has to be the Big East first. If we can get a Big East game, we’ve got to play the Big East game. We owe it to the Big East.'"

St. John's has taken off despite a back injury to starting guard Greg Williams Jr. that caused him to miss the previous three games and nearly all of the past five. Williams, who was averaging 10.9 points per game, came off the bench in the first half and threw down a one-handed, fast-break dunk with authority to the delight of his teammates. But he tweaked his back, Anderson said, and those were the only points for Williams in four minutes on the court.

Villanova: Tries to bounce back and earn a season sweep of Georgetown after a 76-63 road victory on Dec. 11.

St. John's: Saturday at Providence, which has won nine of the past 11 meetings.