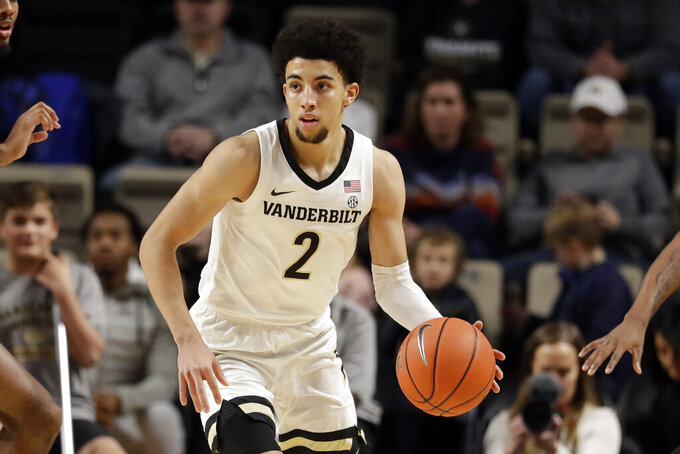 NASHVILLE, Tenn. (AP) — Vanderbilt coach Jerry Stackhouse knows he has a more complete roster going into his second season. He also believes both the Commodores, along with he and his assistants, are better prepared.

“It's great to have a look around and see that it is competitive at every spot," Stackhouse said. “From our starters to our second group to feel like we could possibly have 11 or 12 guys that contribute for us."

Vanderbilt went 11-21 in Stackhouse's first season. The Commodores snapped a 26-game skid in SEC play in a big way, upsetting No. 18 LSU on Feb. 5. They were just 3-15 in league play but did win two of their final three games.

Stackhouse said he and his assistants have a better understanding of teams in the Southeastern Conference. They have tape of the Commodores running Stackhouse's schemes and defense against those teams, and nobody in the SEC changed coaches this offseason during the coronavirus pandemic.

“We have that game on tape right now with all of our foes and feel better about how we approach that going forward,” Stackhouse said.

Senior guard DJ Harvey believes the Commodores will surprise a lot of people this season because they have a lot more weapons now than last season.

“I know we say that every year,” Harvey said. “But I really think with the new pieces that we have and then the new guys that have a year under their belt, the freshmen coming back and then with Max (Evans), Cle (Clevon Brown) coming back, and then we have a lot of experience.”

Aaron Nesmith bypassed his final two seasons of eligibility in March when he declared for the NBA draft. Vanderbilt had most of the SEC schedule to get used to life without the prolific 3-point shooter when Nesmith, then the league's leading scorer averaging 23 points a game, hurt his right foot in the SEC opener and didn't play again.

Guard Saben Lee also declared for the NBA draft after his junior season. He was Vandy's leading scorer after Nesmith's injury averaging 18.6 points a game.

Stackhouse said after Vanderbilt's final game, the last before the SEC canceled the tournament in March, that he would have more toys in his toy chest and couldn't wait to play with them. That includes Harvey, a 6-6 guard who sat out last season following his transfer from Notre Dame.

Harvey said having a season to learn the system was huge with Stackhouse's staff being big on development. Vandy coaches have had Harvey watching lots of film of NBA players like Jimmy Butler, Paul George and Devin Booker.

“Coach Stackhouse’s system is not easy to learn so that year being under him and being able to work on that and implement it in practice every day was huge,” Harvey said.

Brown is back after the NCAA granted him a fifth year in April after a knee injury limited him to nine games last season. Senior guard Maxwell Evans also is back.

Guard Scotty Pippen Jr. started 31 games as a freshman and is the leading returning scorer after averaging 12 points a game. Dylan Disu averaged 27 minutes as a freshman with five double-doubles. Jordan Wright played in 31 games and scored in double figures six times with a season-high of 23.

Stackhouse also has six freshmen to fill the bench led by a trio of three-star recruits in Tyrin Lawrence, forward Myles Stute and 6-9 center Akeem Odusipe who's a native of Nigeria like senior Ejike Obinna. Point guard Isaac McBride also transferred from Kansas and will be eligible this season.

The Commodores released a 20-game schedule last week starting the season Dec. 1 at UConn in the Roman Legends Classic still working to add up to nine more games to the slate. Right now, their only other non-conference game as of now is Dec. 3 against either BYU or Southern California in that tournament.

They start SEC play Dec. 30 hosting Florida before going to Kentucky on Jan. 5. Vanderbilt wraps up its regular season schedule March 2 at LSU.