Stanford at USC highlights the week in Pac-12 hoops 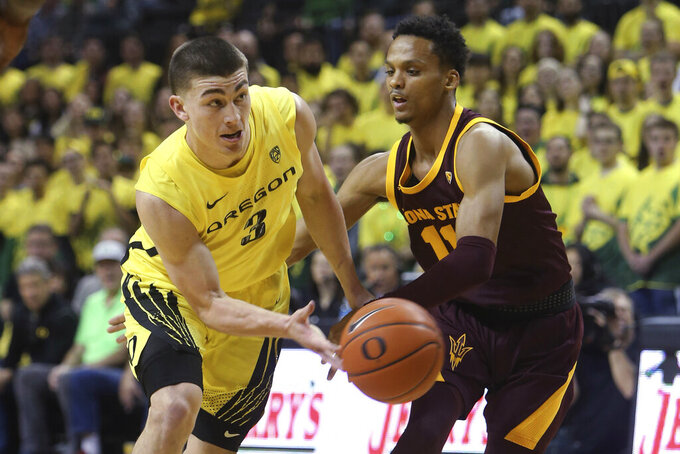 GAME OF THE WEEK: Stanford at Southern California, Saturday. The Cardinal entered the season with a young team and few expectations from outside the program, picked to finish 10th in the Pac-12 preseason media poll. So far, Stanford (14-2, 3-0) has been the surprise of the conference, entering this week as the only team without a conference loss. The Cardinal opened Pac-12 play with a lopsided win over rival California and swept the Washington schools last week for their best start in 16 seasons. Stanford opens this week against UCLA, then has to play the Trojans two days later. USC sandwiched wins over Washington State and UCLA with a loss at Washington. The Trojans have a trio of players scoring in double figures, led by Onyeka Okongwu, who's averaging 16.9 points and 8.7 rebounds. Get by UCLA and Stanford's unblemished conference record will be put to a big test.

LOOKING AHEAD: Colorado moved back into the rankings this week after beating Utah, but have a tough road trip through the desert. The Buffaloes open the week Thursday against Arizona State, which beat Oregon State and lost to Oregon last week. Next up is a trip to Arizona's McKale Center on Saturday. The Wildcats have been struggling, losing five of seven after being swept by the Oregon schools, but have three of the conference's best freshmen in Nico Mannion, Josh Green and Zeke Nnaji.

INSIDE THE NUMBERS: Every Pac-12 program had at least one conference win by Jan. 9, the earliest conference schools have accomplished that since the Pac-10 expanded to an 18-game schedule in 1978-79. ... USC is one of four major-conference schools with at least four road victories — with Duke, DePaul and Georgia Tech — after winning at UCLA. ... Oregon State's Tres Tinkle needs 21 points this week to become the 16th Pac-12 player to reach 2,000 career points.

PLAYER TO WATCH: Payton Pritchard, Oregon. The Ducks' senior guard has been one of the Pac-12's best players the past few seasons and has a chance to make history this week. Pritchard needs 12 assists and eight rebounds against the Washington schools to become the first player in Pac-12 history with 1,500 points, 600 assists and 500 rebounds.

ON THE WOMEN'S SIDE: The Pac-12 has marquee match-ups every week and it's no different this week with No. 3 Stanford playing at No. 6 Oregon on Thursday and at No. 8 Oregon State on Sunday. The Cardinal won their first four conference games and are a half-game behind No. 7 UCLA, the only undefeated team left in the country at 16-0. The Bruins play rival USC on Friday. ... The Pac-12 tied a conference record with six women's teams ranked this week after Arizona State moved into the rankings at No. 20 following a home sweep of the Oregon schools. Arizona is at No. 18.