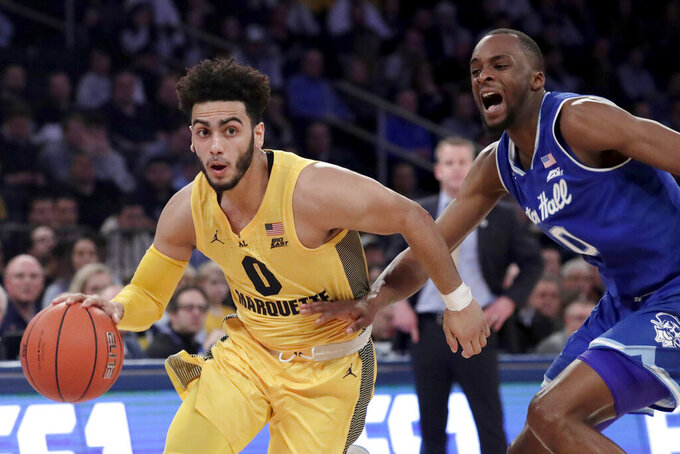 "We were the first two people to show up to a meeting," Howard said. He broke the ice and the two have kept in touch ever since, trying as best as they can to follow each other's spectacular seasons.

That will be easy on Thursday: Morant and the 12th-seeded Racers will face Howard and No. 5 Marquette in a West Region first-round game being played on the East Coast.

"It's crazy just how basketball works," Howard said. "It's definitely a cool situation."

The showdown between two of the nation's top-10 scorers is a marquee event that just about everyone associated with the teams tried to downplay Wednesday at the XL Center in Hartford.

"I think a lot of people want to make this a one-on-one duel," Marquette coach Steve Wojciechowski said. "But from our perspective, this is Marquette versus Murray State."

Don't expect many head-to-head matchups between the star guards. Those difficult defensive assignments will land with teammates.

Defending the 6-foot-2 Morant, who averages 24.6 points and nation's-best 10 assists per game, will be the first-and-foremost job of Marquette's Sacar Anim, a 6-5 junior. Playing in the Big East, Anim has experience guarding NBA prospects such as St. John's Shamorie Ponds. He conceded that Morant is a different level of talent.

"There's probably nobody in the Big East that's like him. He's a top-three pick projected for a reason," Anim said. "His combination of athleticism, his speed and his vision. Especially at that size. He has those long arms. There's a little bit similar players, but he's unique in his own way."

Anim can expect a lot of help.

"You literally have to guard him with five guys. There's not one guy in the country that can guard him alone," Marquette assistant coach Stan Johnson said. "We got to make sure he sees a second and third defender all night."

Murray State will take a similar approach against Howard, who at 5-11 is probably the best player in the country under 6-feet. The junior averages 25 points per game and shoots 41 percent from 3-point range.

The Racers have the luxury of not needing to use Morant to lock down the other team's best perimeter player. Shaq Buchanan, a 6-3 senior, is the Ohio Valley Conference defensive player of the year.

"It's a great thing to have for us and, to be honest, Tevin Brown's a great defender as well," Murray State assistant coach Tim Kaine said. "So when you have Shaq, Ja and Tevin on the perimeter, for us we felt like we had a high level perimeter, not only offensively but defensively as well."

In Howard's last game, against Seton Hall in the Big East Tournament, he shot 1 for 15 from floor, but still scored 21 points. He shot 24 free throws.

"He can do it all. I'm just trying to make it tough and make him finish over our bigs," Buchanan said. "I'm just going to have to watch my hands. He's a very smart player so he knows how to draw fouls."

Howard was bothered by a sore left wrist in the Seton Hall game, but said he is feeling fine now.

While Howard has steadily grown into a star in his three seasons at Marquette, going from 13.2 points per game as a freshman to 20.4 last year to leading the Big East in scoring this season, Morant's rise his sophomore season has been meteoric. Lightly recruited out of South Carolina, Morant averaged 12.7 points and 6.3 assists as a freshman for Murray State.

"Coming from being overlooked in high school, and not receiving that much attention, there was time I questioned myself: Was I good enough?" Morant said.

There is no question about that anymore.

"I knew he was special when I saw him at the camp," Howard said.

And now Morant and Howard have made Marquette-Murray State a must-see event in the first round of the NCAA Tournament.