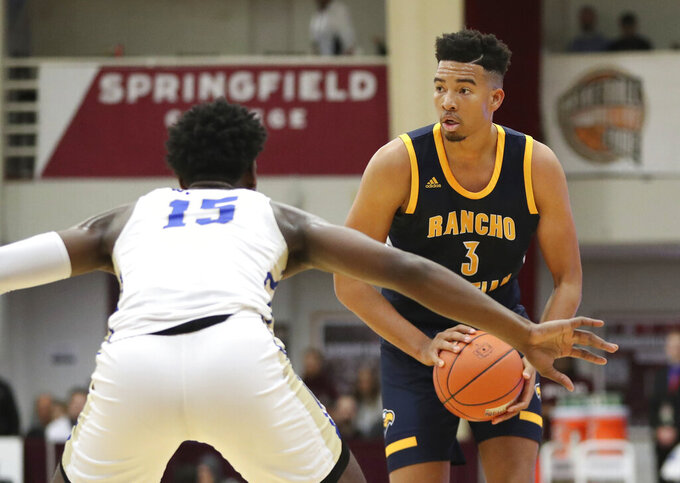 FILE - In this Jan. 21, 2019 file photo Rancho Christian's Isaiah Mobley #3 in action against McEachern during a high school basketball game at the Hoophall Classic in Springfield, MA. Mobley, a 6-foot-10, 235-pound McDonald's All-American, has solid ball-handling skills and can score from 3-point range. He had foot surgery last spring and missed the Trojans' foreign tour in the summer, but is expected to be ready for the start of the season. (AP Photo/Gregory Payan,File) 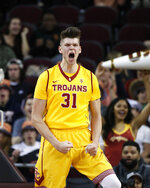 LOS ANGELES (AP) — Southern California has talent, depth and size on its roster. How quickly the Trojans mesh a mostly new group with four returnees will ultimately decide how far they go.

Last season, USC finished 16-17 and tied for eighth in Pac-12 play at 8-10, the program's first losing season in four years.

Entering coach Andy Enfield's seventh season, the Trojans haven't been to the NCAA Tournament since 2017. They're picked to finish fifth in the Pac-12 this season. After bringing in yet another highly regard recruiting class, Enfield has reason to believe things could be different.

"Our team is high-energy. They're very, very competitive," Enfield said. "Our freshmen are as equally talented as our upperclassmen."

"The sky's the limit," senior Jonah Mathews said. "We have a really good chance to be better than any team I've been with here."

It starts with forwards Isaiah Mobley and Onyeka Okongwu. Mobley, a 6-foot-10, 235-pound McDonald's All-American, has solid ball-handling skills and can score from 3-point range. He had foot surgery last spring and missed the Trojans' foreign tour in the summer but is expected to be ready for the start of the season.

Okongwu was California's Mr. Basketball as a junior and senior at nearby Chino Hills High (where the Ball brothers starred). The 6-9, 245-pounder is an aggressive and physical defender. They'll be counted on to succeed early alongside senior Nick Rakocevic in the post.

"They complement each other very well," Enfield said of Mobley and Okongwu.

The Trojans open the season at home against Florida A&M on Nov. 5.

Rakocevic is one of the Pac-12's top returning big men. The senior averaged 14.7 points and 9.3 rebounds last season and his 15 double-doubles were second-most in the league. He shot 55% from the field, but will need to avoid the foul trouble that plagued him last season. Rakocevic, along with big men Mobley (his father is a Trojans assistant) and Okongwu, will help the team make up for departed Bennie Boatwright and give USC an imposing frontcourt.

Besides Mobley and Okongwu, the other freshmen are forward Max Agbonkpolo, and guards Ethan Anderson, Drake London and Kyle Sturdivant. Agbonkpolo, from Rancho Santa Margarita, California, is an athletic 6-foot-8 forward. Anderson averaged 20.8 points, 6.2 rebounds and 6.3 assists at LA's Fairfax High as a senior. London averaged 29 points as a senior at nearby Moorpark High and will join the team after football season. He's on a football scholarship as a wide receiver. Sturdivant figures to be part of the guard rotation. The 6-3, 200-pounder was one of the top players in Georgia as a senior at Norcross High.

Guards Elijah Weaver and Mathews will form the backcourt after starter and assists leader Derryck Thornton transferred. At 6-6 and 210 pounds, Weaver is a tough matchup for most opposing guards. Mathews averaged 12.6 points and made a career-high 78 3-pointers last season.

Guard Quinton Adlesh and guard-forward Daniel Utomi are the Trojans' two graduate transfers expected to add shooting in the backcourt. Adlesh comes from Columbia, where he was a career 40% 3-point shooter. Utomi is from Akron, where he averaged 15.4 points as a starter the last two seasons and can play either guard position. Utomi also has made over 200 3-pointers in his career. "They're mature physically, they're mature mentally and they're professionals when they step on the court," Enfield said. "They've been a huge addition to our program not only from a talent perspective but how they conduct their business on a day-to-day basis."

Along with other schools, the Trojans are facing an ongoing NCAA investigation that could result in punishment for major rules violations connected to college basketball's corruption scandal. Former assistant Tony Bland pleaded guilty to a felony bribery charge. The Trojans indefinitely suspended De'Anthony Melton in 2017-18 after a family friend of Melton's was linked to the federal case. He withdrew from school and later declared for the NBA draft.

Guard Chuck O'Bannon, a former McDonald's All-American, has yet to make an impact with the Trojans. The son of former UCLA star Charles O'Bannon averaged just 1.3 points as a freshman in 2017-18 before missing all but one game last season with an injured pinky finger. He was hurt over the summer and didn't participate in the Trojans' foreign tour. "He had a very good preseason," Enfield said. "He's slowly getting back to where he needs to be."

The Trojans play five of their first six games at Galen Center. Their nonconference schedule includes a Nov. 16 visit to Nevada (against former UCLA coach Steve Alford), the Orlando Invitational over Thanksgiving, at TCU on Dec. 6 and playing No. 22 LSU on Dec. 21 at Staples Center. Florida Gulf Coast, where Enfield first gained national prominence taking the Eagles to the Sweet 16, visits on Dec. 29.