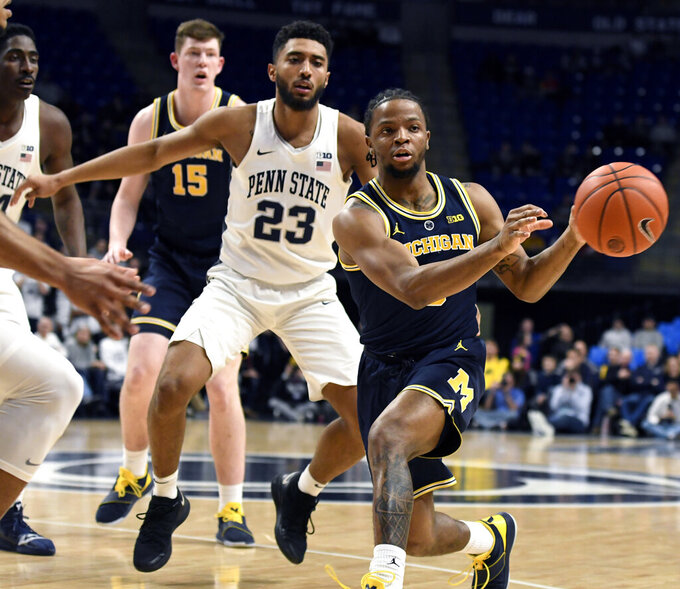 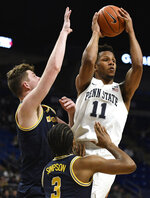 STATE COLLEGE, Pa. (AP) — Lamar Stevens pumped his arms, pointed with two fingers to the Bryce Jordan Center hardwood and screamed toward Penn State's student section. This is his court.

Penn State's rangy forward owned it Tuesday night, then shared it with hundreds of fans who rushed Stevens and his teammates after Penn State upset No. 6 Michigan 75-69.

"I don't think our record is a reflection of how hard this team has worked," Penn State coach Patrick Chambers said. "How they've competed and really put themselves out there."

Penn State pulled away over the first 20 minutes as its star heated up and Michigan played the second half without its coach.

Michigan coach John Beilein received back-to-back technical fouls and was ejected for arguing with officials as the teams entered the locker rooms after the first half.

By that point, Stevens had potted 10 points during an 18-9 run that made it 40-27 at halftime. The rangy forward came up big on the other end of the floor as well. He blocked Poole's layup try then came up with a rebound on another Michigan miss seconds later to foil the Wolverines' final first-half possession.

Charles Matthews scored 24 points and Jordan Poole added 17 for the Wolverines who never led after the first 2:24. Meanwhile, the Nittany Lions led by as many as 12 with 1:27 to play.

"They were absolutely terrific today," Beilein said. "It's great for our league to have a team that is in the bottom of the league beat a team that's competing for the championship. It's great parity."

Michigan pulled within four on Jordan Poole's 3-pointer with 18 seconds left, but Stevens went 2-for-4 from the free throw line to keep the game out of reach.

With the Nittany Lions up by four midway through the first half, Stevens

The usually mild-mannered Beilein appeared to be upset after Penn State guard Jamari Wheeler barreled over Zavier Simpson to free up Rasir Bolton's buzzer-beating layup. Beilein needed to be calmed down by assistants DeAndre Haynes and Saddi Washington as he approached the scorer's table to argue, then again after he was assessed another violation as he was walking away.

Washington assumed head coaching duties in the second half.

The ejection was Beilein's first at Michigan and first since he was in his mid-20s. He politely declined to say what he was upset with or what he said to the officials but promised he would have an "interesting" discussion with the league office.

"I haven't been thrown out of a game since it was, I think it was '78, '79, so about 20 years before most of you were born," Beilein said. "And you know me, I very rarely get a technical so I'll deal with the league office going forward and see what I can do differently."

Stevens turned in three blocks including a pair of back-to-back stuffs with less than 4:30 to play that prompted his scream toward to the student section. After he made his ninth basket of the game — a short jumper over a Michigan double team to make it 62-54 — Stevens hustled back on defense to swat the ball away from Ignas Brazdeikis. He hustled back again to kill Michigan's next possession with a right-handed stuff of Isaiah Livers under the hoop.

Penn State's forward was also up for the challenge Michigan center Jon Teske posed. Stevens scored most of his basket in one-on-one situations against Michigan's big man.

"He's a great player but I thought I had the advantage," Stevens said. "I went at him and it went in my favor tonight."

Michigan: The Wolverines were out of sorts early and played their worst first half of the season. They also lost their hold on first place in the Big Ten as No. 11 Michigan State's win forces a tie at the top with six games left.

Penn State: Stevens had his 10th career double-double and the Nittany Lions gave themselves a better chance to avoid a last-place Big Ten finish.

Michigan: Hosts No. 24 Maryland on Saturday.