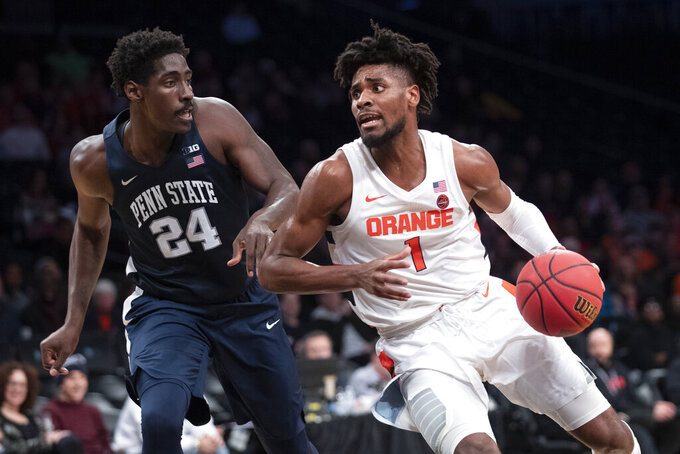 Syracuse forward Quincy Guerrier (1) drives against Penn State forward Mike Watkins (24) during the first half of an NCAA college basketball game in the consolation round of the NIT Season Tip-Off tournament, Friday, Nov. 29, 2019, in New York. (AP Photo/Mary Altaffer)

NEW YORK (AP) — The Penn State Nittany Lions believed they have the makings of a good team.

They backed up their belief with a complete performance at Barclays Center which left Patrick Chambers echoing his team.

“We (have) to play to win (and) we thought we did that tonight,” Chambers said Penn State’s 85-64 win over Syracuse in the consolation game of the NIT Season Tip-Off on Friday.

Whereas Chambers left Barclays Center feeling optimistic about his squad, Syracuse coach Jim Boeheim believes his squad is going to go through growing pains this season.

“I thought this team would take a while,” Boeheim said. Elijah Hughes led the Orange (4-3) with 19 points and Buddy Boeheim scored 14. Quincy Guerrier had 13 points and 10 rebounds and Marek Dolezaj added 10 points.

Down by seven points at halftime, the Orange opened the second half with an 8-1 run over the first 2 ½ minutes, capped by Hughes’ break-away two-handed jam to tie the game 35-all.

Following Hughes’ dunk, the Nittany Lions outscored Syracuse 24-16 to go up 59-52 with under seven minutes to play.

“I’m really proud of the way they responded,” Chambers said.

Minutes later, Lundy drilled a right side 3 as the shot clock expired to extend the lead to 66-56, and Jones’ fade-away, buzzer-beating 3 with seconds left gave Penn State its margin of victory.

Syracuse’s frontcourt starters Marek Dolezaj and Bourama Sidibe battled foul trouble. Sidibe fouled out with 6:58 left in the second half, and Dolezaj fouled out with 1:28 left.

The Orange missed 11 free throws and made just 6 of 24 from 3-point range.

Penn State: Following a loss to Ole Miss on Wednesday, in which Penn State blew a 21-point lead early in the second half, Nittany Lions coach Patrick Chambers publicly challenged his team’s mental toughness. Penn State limited the Orange to 33.3% shooting and outrebounded them 56-29 on Friday.

Syracuse: Coach Jim Boeheim was circumspect after the Orange were routed by Oklahoma State Wednesday night. The Orange have an inexperienced backcourt that is learning on the job. Buddy Boeheim and Joe Girard III combined to shoot 6 for 25 from the field, 3 for 14 from 3, and commit five turnovers.

“We (have) two young guards (who) are just not doing the things that we need to do to win,” Jim Boeheim said.