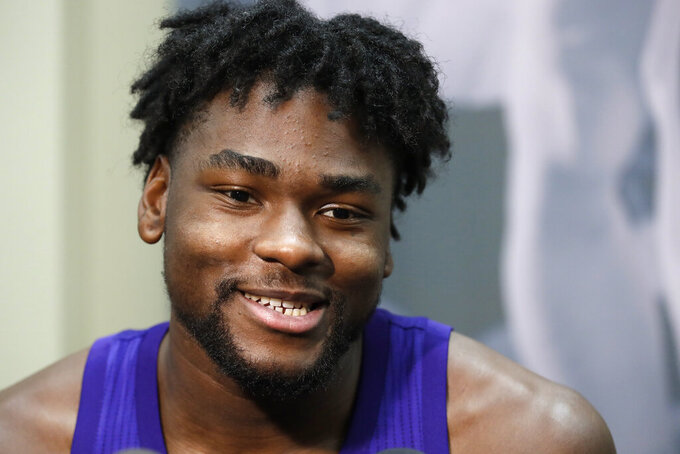 The bruising forward who was one of the top recruits in the country will play what will likely be his only season of college basketball at Washington, some 2,600 miles from where he grew up.

Yet it was Stewart, a player with no real connection to the Pacific Northwest, who ultimately led the recruiting efforts that landed Washington its other prized freshman: Seattle-area native Jaden McDaniels.

"We tried to do a group text and Jaden, he is pretty quiet, so I didn't know if he was going to come here or not," Stewart said.

Usually it works the other way around — the local selling the out-of-state kid. But the Huskies don't care how it happened. They just know they've got two of the top young players in the country on their roster heading into Friday's season opener against No. 16 Baylor in Anchorage, Alaska.

"It was difficult from all the people telling me to do different things," said McDaniels, who didn't commit until late May with a late-night social media post the Huskies coaches had no idea was coming. "For me, I felt like I could go anywhere I wanted to and make an impact. I felt I could come here and make an impact and being comfortable with all the coaching staff and the players, the freshmen coming in, it was a real comfortable situation for me."

A year after winning the Pac-12 regular-season title led by an experienced group of seniors, the Huskies' success this season will largely depend on how well their freshmen are able to make the transition to the college game. McDaniels and Stewart are the headliners — and rightfully so — but the Huskies also expect to get contributions from guards Raequan Battle and Marcus Tsohonis.

It's not an easy ask for freshmen to be leaders, either vocally or by being primary options on the court. But for the Huskies to do what they want, McDaniels and Stewart don't really have a choice.

Stewart and McDaniels are complementary players, which is why they might end up being successful in tandem. Stewart is a scoring force on the low block. While he's worked to expand his game to the outside, he is most dangerous using his 6-foot-9, 250-pound frame to score near the basket.

McDaniels can play on the interior, but he's not the same kind of player as Stewart. McDaniels is also 6-foot-9, but he is long and lanky and is likely more comfortable on the wing than dealing with bigger bodies in the paint. From the eye test, McDaniels looks like a skinnier version of Kevin Durant.

His coach, Mike Hopkins, sees McDaniels as a vital piece.

"I see unselfish, I see elite, I see playmaker. I see an incredible player," Hopkins said. "We all have to get better, but boy the things that he does on the court are pretty special."

Facing Baylor is not an easy indoctrination for a relatively inexperienced team. Baylor will already have a game in hand after a blowout win over Central Arkansas on Tuesday. Washington got a boost when transfer guard Quade Green had his waiver approved by the NCAA, making him eligible to play all season.

It's easily the most difficult opener Hopkins has faced in his three seasons with the Huskies, but he'd prefer to throw his team into a challenge and see how his youngsters respond.

"Jumping in the deep end," Hopkins said. "You're playing one of the great programs. Their program, what he has built has been incredible. They've had great runs in the NCAA Tournament, are from a great league. All we're trying to do is find out how we can become our best and the only way you can do that is to play against the best."