Strong 2nd half lifts No. 10 Bluejays past No. 21 Texas Tech 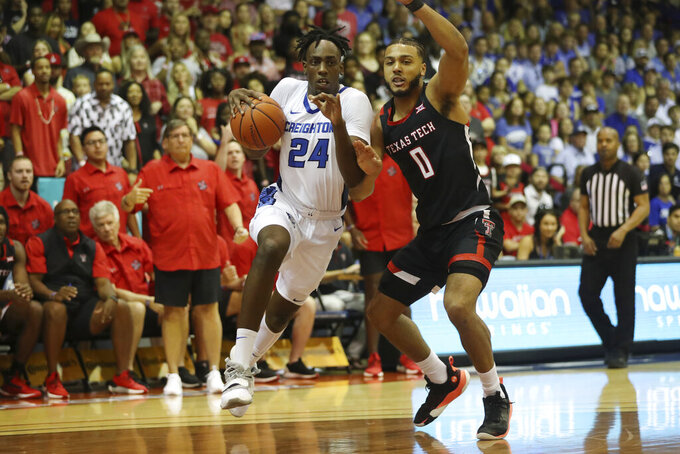 The 10th-ranked Bluejays looked like their old selves after that, getting out to a quick lead in the second half and pulling away for a 76-65 win over the No. 21 Red Raiders in the opening game of the Maui Invitational on Monday.

“First time on the road with this team, maybe they were anxious and excited,” Creighton coach Greg McDermott said. “We certainly weren’t ourselves early in that game. We had as many turnovers in the first 20 possessions, I think, as we’ve had in four games. So once we settled in, I thought we were pretty good.”

The Bluejays (5-0) committed a season-high 13 turnovers, all in the first half, and then started rolling.

Arthur Kaluma scored 18 points to lead all five Creighton starters in double figures. Trey Alexander had 13 of his 17 points after the half and Ryan Nembhard finished with 16. Baylor Scheierman had 11 points and 12 rebounds. Big man Ryan Kalkbrenner, who rolled his ankle late in the first half and aggravated it late in the second, had 10 points.

“Thank goodness Kalkbrenner was tough enough to play through a pretty good sprained ankle,” McDermott said, “because his presence at the rim and on the glass for us is so important.”

Daniel Batcho scored a career-high 17 points for the Red Raiders (3-1), who led by seven points early while Creighton struggled to adjust to their trademark in-your-face defense.

“You can prep all you want," McDermott said, "but it’s so hard to simulate the physicality of their defense and the quickness of their rotations.”

Creighton outscored Texas Tech 23-12 coming out of the half to break open a 31-all game.

“The biggest difference was that first four minutes,” Texas Tech coach Mark Adams said. “They came out and just punched us in the mouth and I thought that was the difference. They came out with just a really aggressive mindset on both ends of the floor. It set the tone for the rest of the game.”

Alexander took Scheierman's pass from the post and hit a 3-pointer from the wing to get the second half started. After Kaluma blocked a shot, Alexander passed to Nembhard for a lay-in. A minute later, Nembhard scored with his left hand from the right side of the basket, and Alexander followed with a three-point play.

Nembhard's 3-pointer off the dribble gave the Bluejays their first double-digit lead, and Kaluma scored seven straight points for Creighton to make it 64-50 with seven minutes to play.

The Bluejays turned over the ball five times in their first six possessions, helping Texas Tech go up. They found some rhythm during a 13-2 run that put them in front, but another rash of turnovers kept them from building on it.

“Second half we really weren’t in the game,” Adams said. “But it goes back to their great shooting and their shot selection.”

Texas Tech: The Red Raiders allowed an average of 52.7 points over their first three games but gave up 45 in just the second half to Creighton. The game showed that Tech lacks the offensive firepower to match elite opponents if the defense isn't on point.

Creighton: The Bluejays showed how good they can be in the second half. The concern is Kalkbrenner's left ankle. He's one of the best big men in the country and must be healthy for the Bluejays to have a chance of reaching their lofty goals.

Texas Tech plays Tuesday against Louisville, an 80-54 loser to No. 9 Arkansas.

Creighton plays Tuesday against No. 9 Arkansas, an 80-54 winner of Louisville.