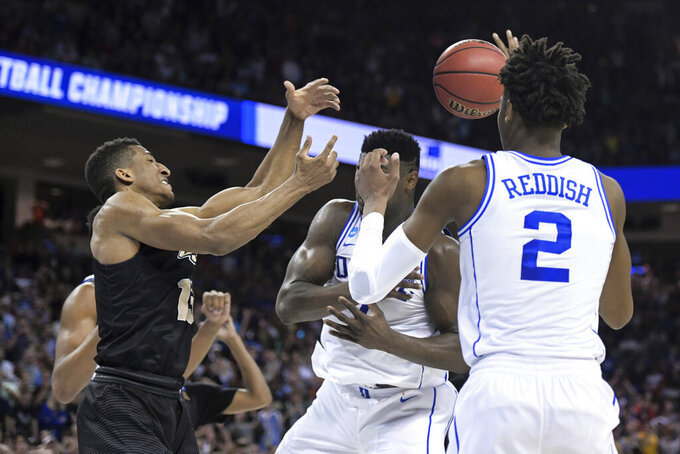 Based on ratings from the nation's largest media markets, the Nielsen company said CBS and the Turner Networks had the second best performance over the last 29 years for the first four games of the NCAA men's basketball tournament. The only year to do better in that period was 2015.

Nielsen did not have exact viewership numbers, but Duke's close call Sunday against Central Florida was particularly popular.

In an otherwise quiet week for prime-time television, CBS' "60 Minutes" was the only show to top 10 million viewers.

Last Friday, when word got out that special counsel Robert Mueller had completed his work and cable television began talking about it, Sean Hannity of Fox News Channel had 3.13 million viewers, just behind colleague Tucker Carlson's 3.2 million. Rachel Maddow of MSNBC had 2.9 million, Nielsen said.

ABC's "World News Tonight" topped the evening newscasts with an average of 8.6 million viewers. The "NBC Nightly News" was secod with 7.9 million and the "CBS Evening News" had 6.3 million.

ABC is owned by The Walt Disney Co. CBS is owned by CBS Corp. CW is a joint venture of Warner Bros. Entertainment and CBS Corp. Fox is owned by 21st Century Fox. NBC and Telemundo are owned by Comcast Corp. ION Television is owned by ION Media Networks.

This story has been corrected to show correct viewership for Sean Hannity on Friday.