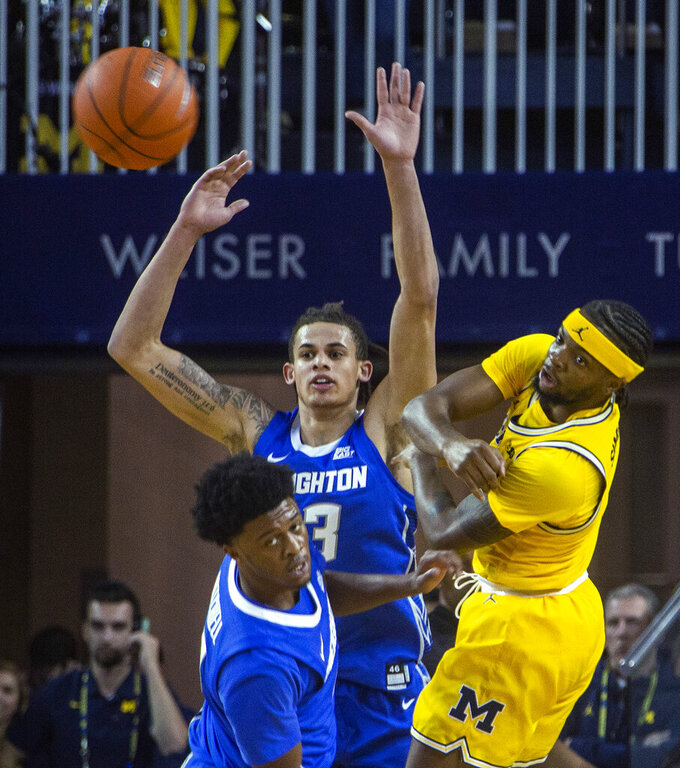 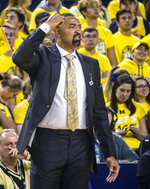 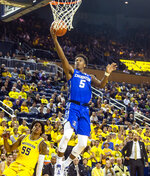 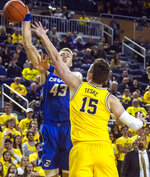 Needless to say, that was discussed.

"They shoot a lot of 3s. There's going to be a lot of long rebounds," said Jon Teske, Michigan's 7-foot-1 center. "Go get the rebounds with two hands instead of one. They were just being more aggressive than us in the first half. In the second half we had to change that."

The Wolverines allowed eight more offensive rebounds in the second half on Tuesday night, but Michigan's defense was tight enough down the stretch to beat the Bluejays 79-69. The Wolverines outscored Creighton 41-28 after halftime, passing their first significant test under new coach Juwan Howard.

Zavier Simpson had 17 points and nine assists for Michigan, and Isaiah Livers scored 22 points. The Wolverines (2-0) shot 57% from the field.

Michigan was 7 of 16 from 3-point range in the first half but still trailed 41-38 after 20 minutes. Then the Wolverines, who relied heavily on their defense the past couple seasons, were impressive on that end in the second.

Livers put the Wolverines up 60-52 with an alley-oop dunk, and a driving layup by Simpson made it 64-55.

"Not being able to keep Simpson out of the paint ended up being the downfall in the end," Creighton coach Greg McDermott said. "If he gets into the paint, he's got room to make decisions. He's going to pick your defense apart."

Teske gave the Bluejays problems with his size at both ends of the court. He had 17 points, seven rebounds, three blocks and two steals, and Michigan eventually found him for enough easy baskets to keep Creighton at bay.

Ty-Shon Alexander led Creighton (1-1) with 20 points, and Marcus Zegarowski added 18. Mitch Ballock scored the first eight points of the game for the Bluejays but finished with only 11.

Creighton: The Bluejays did not have a starter over 6-foot-7, so it's no surprise that Teske was a problem. They were quick enough to come up with all those offensive rebounds, but ultimately enjoyed just a 13-4 advantage in second-chance points, which wasn't enough.

Michigan: Simpson and Livers were particularly sharp on this night, and Michigan was impressive on defense while not fouling. Creighton did not make a free throw and attempted only two in the game. The Wolverines won despite attempting 20 fewer field goals than the Bluejays.

Teske can block or alter a lot of shots with his size and aggressiveness, but that sometimes leaves him out of position for rebounds. That's something the whole Michigan team should be mindful of.

"Teske does a fantastic job of protecting the paint. That's his job," said Howard, who won his debut as Michigan's coach last week against Appalachian State. "We have to crack back and not allow those bigs to run in freely to get offensive rebounds."

Jacob Epperson, Creighton's 6-foot-11 center, has dealt with back and knee issues, and he injured his right leg in practice recently. He did not play, but 6-foot-11 Kelvin Jones had nine rebounds — seven at the offensive end — in only 15:58.

Despite their size issues, the Bluejays had a 42-32 advantage in points in the paint.