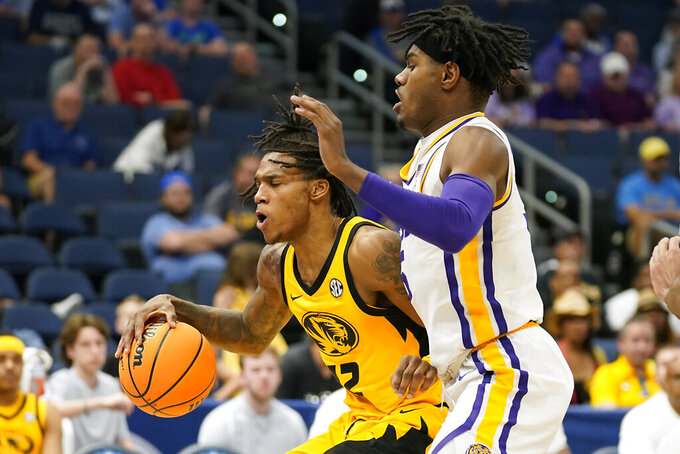 LSU forward Mwani Wilkinson, right, collides with Missouri guard DaJuan Gordon as he pulls up during the second half of an NCAA men's college basketball game at the Southeastern Conference tournament in Tampa, Fla., Thursday, March 10, 2022. (AP Photo/Chris O'Meara) 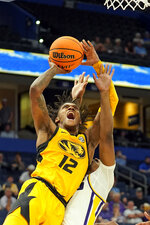 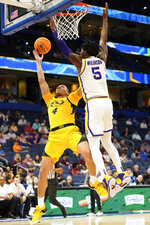 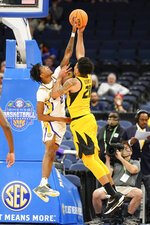 TAMPA, Fla. (AP) — Tari Eason led five players in double figures and fifth-seeded LSU used a big start to roll to a 76-68 win over 12th-seeded Missouri in the second round of the Southeastern Conference tournament on Thursday.

Xavier Pinson and Darius Days combined for LSU’s first 14 points and a 10-point lead, and when Eason hit a jumper with less than five minutes to go in the first half, LSU was up 34-9.

Days had 10 of his 16 points in the first half and Pinson had all 11 of his. Efton Reid added 12 points and Eric Gaines had 11 for LSU (22-10), which plays fourth-seeded and 15th-ranked Arkansas in the quarterfinals on Friday.

DaJuan Gordon scored 19 points, Trevon Brazile had 15 and Javon Pickett 14 for Missouri (12-21), which didn't get within double figures until scoring the last basket of the game.

Mizzou battled back behind Gordon and Ronnie DeGray III to cut the deficit to 16 at the half. Gordon hit two 3s and had eight points and DeGray had a 3 and his three-point play closed it to 39-23.

Missouri's problem was turnovers, 15 that LSU turned into 21 points while shooting 50% in the half.

Pickett had a 3-pointer and Kobe Brown added a three-point play as Missouri had an 8-2 spurt early in the second half and twice got with 10.

LSU then put together a 12-0 run that included six points from Reid and five from Eason to push the lead by to 22 with 9:11 left. Missouri scored the last nine points of the game to make it respectable.

Missouri finished with 24 turnovers that were turned into 29 points. LSU shot 56% for the game but had 11 turnovers in the second half.