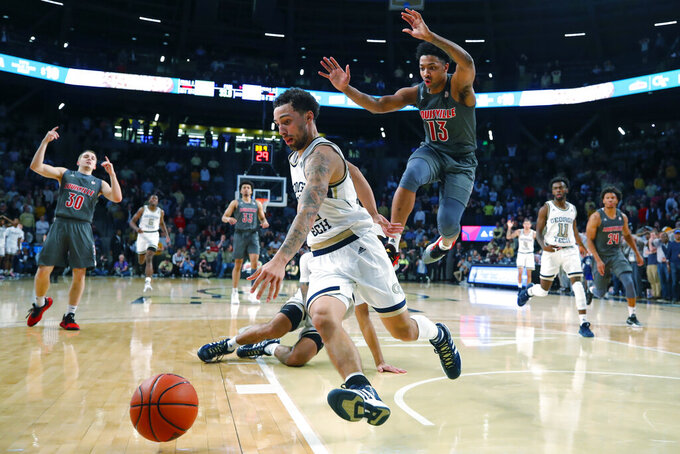 Georgia Tech guard Jose Alvarado (10) comes up with the ball late in the second half of an NCAA college basketball game against Louisville in Atlanta, Wednesday, Feb. 12, 2020. (AP Photo/Todd Kirkland) 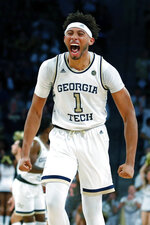 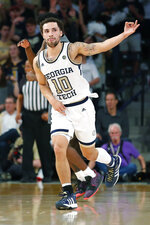 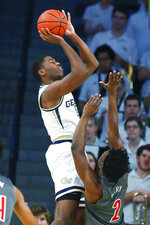 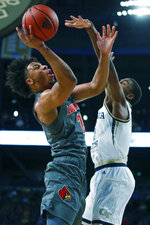 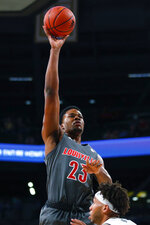 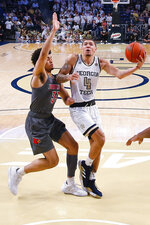 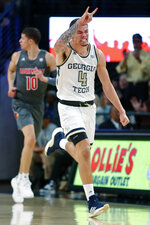 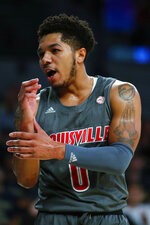 His guys were lethargic. They didn't seem to have any passion. There was no sense of urgency.

When the final horn sounded, the Louisville coach's worst fears were realized.

Trailing all the way and downright awful offensively, the No. 5 Cardinals were dealt a stunning 64-58 loss by Georgia Tech on Wednesday night, snapping their 10-game winning streak.

“It was an ugly game, a muddy game,” Mack said. “We were not dirty enough to win.”

Louisville (21-4, 12-2 Atlantic Coast Conference) lost for the first time since early January with a 40-minute display of airballs and clunkers that allowed the Yellow Jackets (12-13, 6-8) to hang on at the end.

“The first four minutes, we looked like zombies,” Mack said. “We didn't have the readiness or toughness or excitement to play. From that point on, we were battling uphill the whole game.”

It was an especially brutal night for Jordan Nwora, the ACC's leading scorer at 19.5 points per game,. Unable to crack Georgia Tech's man-to-man defense, he was held to a season-low 2 points.

Nwora missed all four of his 3-point attempts, capped off by a desperation heave that didn't hit anything with the clock winding down.

Give credit to Jose Alvarado, who not only led Georgia Tech with 18 points but did a stellar defensive job on Nwora.

“I knew coming in that I was going to be guarding a big-time player,” Alvarado said. “I just gave it all I've got on defense.:”

With the outcome still in doubt, it was Moses Wright who came through at both ends of the court.

Trailing 53-51 with under 2 minutes to go, the Cardinals took off on a two-on-one fast break that seemed certain to produce the tying basket. David Johnson went up for the apparent lay-in, but Wright came out of nowhere to block the shot.

The officials did a lengthy video review to make sure it wasn't goaltending, finally awarding the ball to the Yellow Jackets.

At the offensive end, Wright got the ball near the foul line, drove for the hoop and dropped one in to extend Georgia Tech's lead with 55-51 with just over a minute left. He finished with 12 points.

“To make those two plays in that sequence, that was the game,” Georgia Tech coach Josh Pastner said.

Louisville had one more chance to force overtime, but Lamarr Kimble stumbled driving into the lane, losing the ball for the last of the Cardinals' 16 turnovers.

Georgia Tech jumped all over the Cardinals right from the opening tip, racing to a 12-2 lead that prompted Mack to call a timeout just 3 1/2 minutes into the game.

Working the ball crisply inside and out, the Yellow Jackets made five of their first seven shots, including a couple of 3-pointers by Alvarado.

Louisville endured a scoreless drought of 4:23 before finally knocking down a free throw to halt Georgia Tech's run.

Mack showed his disgust by yanking Nwora out of the game before the first timeout.

“The starters really weren't ready to play,” Mack said. “I probably should have played the reserves more.”

Georgia Tech lost the first meeting between the teams on Jan. 22, squandering an 11-point lead early in the second half to lose 68-64.

This time, the Yellow Jackets made it stand up.

Wright missed most of practice the previous day to take care of a classroom project.

When he finally arrived at the gym, Pastner put him through a grueling individual workout.

“I told him, ‘Hey, this is what you need. There’s going to be a possession tomorrow that determines us winning and losing,'" Pastner said.

Louisville: The Cardinals hardly looked like the No. 5 team in the country, taking their first loss since a 78-65 setback to Florida State on Jan. 4. While Mack conceded that he's looking for improvement at the defensive end and fewer turnovers, he hardly think thinks one loss overshadows all the good things his team has done this season.

“To sit up here after 21 wins and say this is a huge issue, I'd be lying,” the coach said. “The guys have for the most part, while not perfect, answered the bell and answered the challenge.”

Georgia Tech: The Yellow Jackets finally won a close game. Six of their eight ACC losses had been by less than 10 points.

“We're right at that doorstep,” Pastner said. “The next phase to move the needle in the program is to get through that door. That's the hardest part. To get through the door, you've got to win these type of games.”

Louisville: Travel to Clemson for a rematch against the Tigers on Saturday. The Cardinals won the first meeting 80-62 on Jan. 25.

Georgia Tech: Have a week off before heading to Wake Forest next Wednesday.