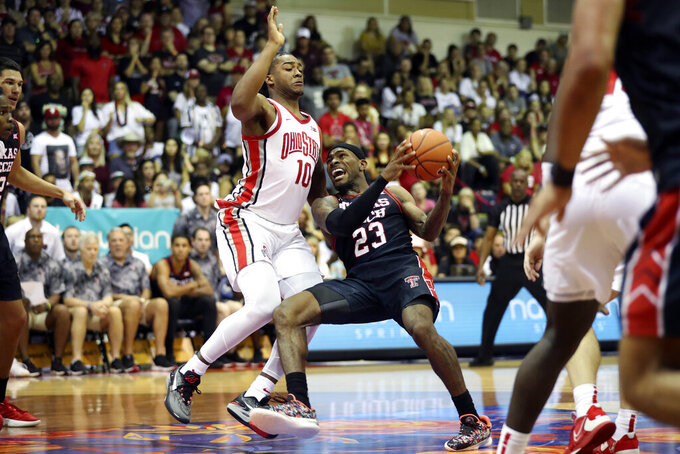 Texas Tech guard De'Vion Harmon (23) tries to get to the net under Ohio State forward Brice Sensabaugh (10) during the second half of an NCAA college basketball game, Wednesday, Nov. 23, 2022, in Lahaina, Hawaii. (AP Photo/Marco Garcia)

LAHAINA, Hawaii (AP) — Justice Sueing couldn't have asked for a much better homecoming, especially after sitting out nearly all of last season with an injury.

The Honolulu native scored 23 of his career-high 33 points in the second half to help Ohio State hold off No. 21 Texas Tech for an 80-73 win in the fifth-place game in the Maui Invitational on Wednesday.

Sueing scored 15 points in a row for the Buckeyes in the last 10 minutes to turn back the Red Raiders each time they threatened to make a run.

“It means a lot, especially because I was able to play in front of my family,” said Sueing, who played in the first two games last season before an abdominal injury sidelined him. “The past couple of games I’ve been struggling a little bit just trying to get back into the flow of things being out from injury.”

Ohio State (5-1) shot 52% from the field, made all 18 of its free throws and never trailed after the first two minutes while ending its visit to Maui with wins in two of three games.

“It’s a great tournament,” Sueing said. “It’s a challenge. That’s what we said coming into this, that we were going to get three really good games, and that’s what we got.”

Texas Tech (4-2) got a career-high 21 points from Daniel Batcho and 19 from Kevin Obanor.

The Buckeyes led 41-37 at half and never let the Red Raiders get closer, largely because of the work of Sueing.

“They've got so many players that you have to focus in on that could get 15, 20 points,” Texas Tech coach Mark Adams said. “Just a very, very explosive offense.”

Obanor muscled in a shot from in close to pull Tech within 62-58, but Sueing was fouled shooting a 3-pointer on the Buckeyes' next possession and he made all three free throws.

After Jaylon Tyson hit a 3 from the wing, Sueing put back his own miss, got fouled and made the free throw to make it 68-61.

Sueing scored on a putback and dunked after catching a long inbound pass to put Ohio State up 74-67 and end his personal 15-point flurry.

Sueing also had eight rebounds and five assists, and Sean McNeil added 13 points for the Buckeyes.

Ohio State committed 10 turnovers against a Tech defense that had forced a combined 31 in its first two games in Hawaii.

Sueing had come into the game after making just 7 of 24 shots in his previous two games. He was 12 of 19 against the Red Raiders.

“I wanted him to see a few shots fall because he’s a better shooter than how he’s shot it," Buckeyes coach Chris Holtmann said, “and I think he needed that. He’s a much better shooter, his numbers showed that, than what he’s shown.”

Texas Tech: The Red Raiders, who went 1-2 in Maui, turned in the defensive performance of the year when they held Louisville to 38 points on Tuesday. Their trademark defense understandably softened in its third game in three days.

Ohio State: Winning two of three games in Maui bodes well for a team that returned three players and has 10 newcomers. Sueing, a transfer from California, picked up the team offensively after freshman Brice Sensabaugh, who came in averaging 17 points per game, had all 10 of his points in the first half.