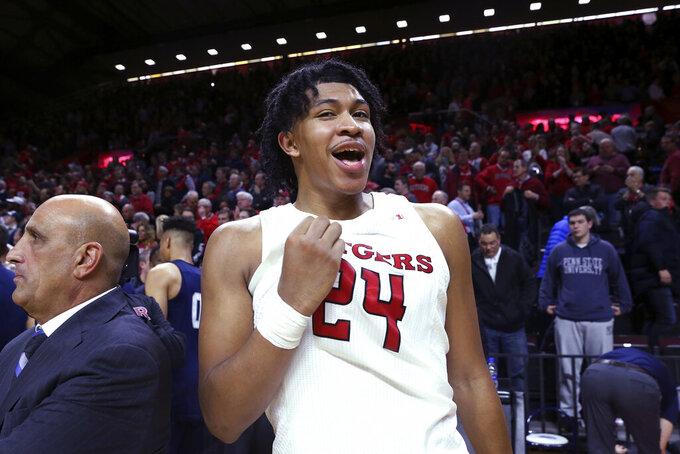 What to watch in Big Ten basketball this weekend:

Rutgers at Illinois, Saturday. Both teams were picked in the bottom half of the Big Ten in the preseason. Both are surprises. Rutgers (12-3, 3-1) has won six straight and is one game behind league-leading Michigan State. The Scarlet Knights are out to their best 15-game start since the 1975-76 team went undefeated in the regular season. They haven't been two games over .500 in conference play since February 2002. Their 72-61 win over No. 20 Penn State on Tuesday gave them two double-digit wins over ranked teams in the same season for the first time in program history. Illinois (11-5, 3-2) is 1 1/2 games out of first place following its 71-70 win at Wisconsin on Wednesday. The Illini, who ended a 15-game losing streak in the series with the Badgers, are above .500 in Big Ten play for the first time since March 2015.

Eighth-ranked Michigan State's 74-58 win over Minnesota on Thursday night closed a five-game homestand and opened a stretch of nine straight against teams that are fifth or lower in the conference standings. Not that it means much. The Big Ten is as strong as ever and there are no gimmes. But no one wants to play the Spartans (13-3, 5-0) right now. They've won eight straight and have been extremely sharp since getting a scare at Northwestern on Dec. 18.

Luka Garza is one of the bright spots for Iowa and has established himself as a contender for Big Ten player of the year. The 6-foot-10, 260-pound junior is the only player in Division I averaging better than 20 points and 10 rebounds. He had 16 points and a career-high 18 rebounds in a loss at Nebraska on Tuesday. He's averaging 22.1 points and 10.7 rebounds and is shooting 56.2% and blocks 1.5 shots per game.

Home teams entered Thursday 22-3 in conference play, 23-3 if Penn State's “neutral court" win over Iowa at the Palestra in Philadelphia is counted. ... Michigan State’s Cassius Winston scored his 1,675th career point and tallied his 802nd career assist on Sunday against Michigan. That made him the first player in Big Ten history with 1,600 career points and 800 career assists. ... Twelve Big Ten teams started the week in the top 50 of the NCAA NET Rankings. No other conference had more than six.

No. 12 Indiana is out to a program-best 4-0 start in Big Ten play, having won each of the four games by double digits. The Hoosiers posted their most lopsided conference win under sixth-year coach Teri Moren when it beat Illinois 83-42 on Monday. The Hoosiers followed that with a 66-48 win over Purdue on Thursday night. Indiana has one of the top shooting teams in the country, is holding opponents to 24-percent shooting on 3-pointers and has an average winning margin of 21 points.