Sweet 16: How each team got through in March Madness 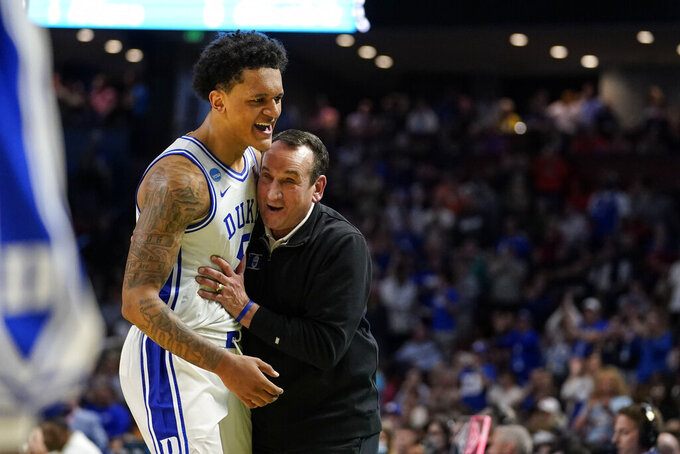 Duke's Paolo Banchero (5) hugs head coach Mike Krzyzewski after a win over Michigan State in a college basketball game in the second round of the NCAA tournament Sunday, March 20, 2022, in Greenville, S.C. (AP Photo/Brynn Anderson)

The second week of the NCAA Tournament is when the Sweet 16 gets reduced to the Final Four.

But those aren’t the only numbers to know heading into this week’s regional semifinals and finals.

To get a better understanding of the final 16 teams competing for the national title, here’s at least one statistic worth remembering about each of them (grouped by region):

ARKANSAS: The Razorbacks lead the nation in free throws made (613) and attempted (808).

DUKE: Paolo Banchero has collected at least 15 points, 5 rebounds and 4 assists in each of the first two rounds. The only other Duke players ever to reach all those benchmarks in back-to-back NCAA Tournament games are Danny Ferry (1987-88), Grant Hill (1994) and Jon Scheyer (2010).

PURDUE: The Boilermakers are 26-0 when scoring at least 70 points this season. When they’re held below 70, they’re only 3-7. They’ve also won each of the last 31 times they’ve led at halftime. They have made 229 more free throws than their opponents, which represents the greatest margin of any Division I team. That includes a 60-13 edge in two NCAA Tournament games.

SAINT PETER’S: The Peacocks have held eight of their last nine opponents below 70 points. That’s thanks in part to KC Ndefo, who has eight blocks in this NCAA Tournament. Ndefo’s 304 career blocks rank second among all Division I players, behind Cincinnati’s Hayden Koval (363).

NORTH CAROLINA: The Tar Heels have the most points per game (94), assists per game (25.5) and 3-pointers per game (12) of any team through the first two rounds. Brady Manek has averaged 27 points through the first two rounds, the most of any player in the Sweet 16. The only other North Carolina players to have at least 26 points in consecutive NCAA Tournament games are Lennie Rosenbluth (1957), Phil Ford (1977), J.R. Reid (1987) and Michael Jordan (1983-84).

UCLA: The Bruins commit just nine turnovers per game, the second-lowest average of any Division I team. They are 24-0 this season in games they lead with five minutes left

ARIZONA: The Wildcats lead the nation with 19.8 assists per game. ... They thrive on runs. They've scored at least 10 consecutive points in 29 of their 36 games.

HOUSTON: The Cougars lead all Division I teams in field-goal percentage defense. Opponents are shooting just 37.5% against them.

MICHIGAN: This is the Wolverines’ fifth straight trip to the Sweet 16. The only school with a longer active streak of Sweet 16 appearances is Gonzaga with seven. … Hunter Dickinson is averaging 23.4 points over his last five games and has shot 67.2% during that stretch.

VILLANOVA: The Wildcats make 82.6% of their free throws to lead the nation. No other Division I team is shooting over 80% from the line. Villanova’s top seven players in minutes all shoot at least 74.1% from the line, with leading scorer Collin Gillespie at 90.2%.

KANSAS: The Jayhawks have 2,353 wins in program history to match Kentucky for the most ever. A victory Friday over Providence would put them at the top.

PROVIDENCE: The Friars thrive in games that come down to the final minutes. They are 11-2 in games decided by five points or fewer.

IOWA STATE: The Cyclones have as many wins in this tournament (two) as they had all of last season while going 2-22. … Tyrese Hunter’s first-round performance against LSU enabled him to join Stephen Curry as the only players in NCAA Tournament history to have at least seven 3-pointers and five steals in one game.

MIAMI: The Hurricanes have collected 11 steals per game thus far in the NCAA Tournament. The only team averaging more steals per game through the first two rounds is Iowa State, the team facing Miami in a Friday regional semifinal.