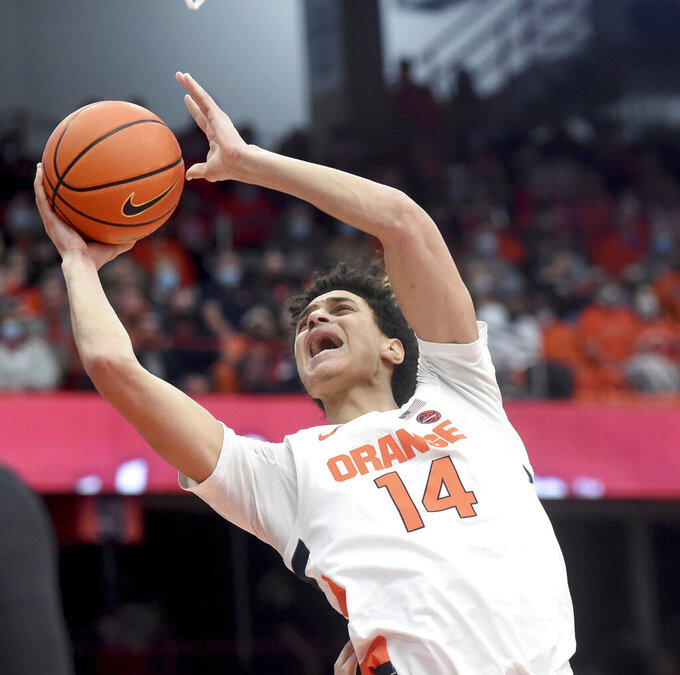 Syracuse center Jesse Edwards (14) follows up on a shot against Louisville during an NCAA college basketball game, Saturday, Feb. 5, 2022, at the Carrier Dome in Syracuse, N.Y. (Dennis Nett/The Post-Standard via AP, Pool)

SYRACUSE, N.Y. (AP) — Syracuse center Jesse Edwards has a fractured left wrist and will miss the rest of the season, the school said Thursday.

Edwards, who has had a breakout junior season, apparently injured his non-shooting hand in Tuesday night’s win at Boston College. He wasn't immediately aware of the seriousness of the injury and continued to play. Late in the game, he collided with Jaeden Zackery attempting to block a shot and tumbled facedown along the baseline. He was called for his fifth foul and went to the bench.

An X-ray and subsequent MRI Wednesday confirmed the break, the school said. Treatment has not been decided, although typically it's an injury that requires surgery.

It’s a big blow to the Orange (13-11, 7-6 Atlantic Coast Conference), who have won four straight in a late-season push. The 6-foot-11 Edwards has been a presence in the middle, though he's been plagued by foul trouble. The Netherlands native was averaging nearly 28 minutes, 12 points and 6.5 rebounds and shooting at a 69.5% clip. His 67 blocks rank second in the ACC and 12th nationally.

Orange coach Jim Boeheim said on a radio show Thursday that he'll look at 6-10 Frank Anselem to help fill the void. The sophomore from Nigeria has played in all but one game as the primary backup, averaging just over 10 minutes. Often-injured Bourama Sidibe, the starter two years ago and in his final season, has played only 8 minutes over four games.

Syracuse has played three forwards at times this season with Boeheim's son, Jimmy, filling in at center for short spurts.