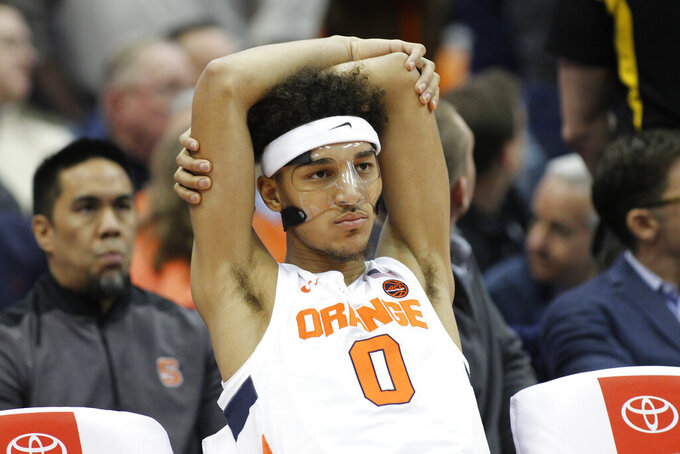 FILE - In this Feb. 11, 2020, file photo, Syracuse's Brycen Goodine reacts on the bench during the second half of an NCAA college basketball game against North Carolina State in Syracuse, N.Y. Goodine announced on his Twitter account that he transferring. (AP Photo/Nick Lisi, File)

“I would like to thank the Syracuse staff and fans for having me at the University this year, however it is time for me to seek out a new beginning. Thank you, Syracuse!” he wrote.

The 6-foot-3 guard from New Bedford, Massachusetts, played in 23 of the Orange's 32 games. He averaged just under nine minutes and 1.9 points. He struggled from long range, hitting 3 of 23 (13%) from behind the arc.

Goodine excelled in his first appearance for the Orange on a preseason trip to Italy, finishing with 11 points, four rebounds, three assists and three steals. He appeared in the first nine games of the regular season, scoring six points in 20 minutes, both season highs, in a win over Bucknell, but he was 0 for 10 from 3-point range in those games and his playing time dwindled.

Goodine broke his nose in early January, missed three games and wore a protective mask for a month. His signature moment came wearing the mask against Wake Forest when he hit the game-winning shot, a putback just before the buzzer in early February. He played in the Orange's final 10 games.