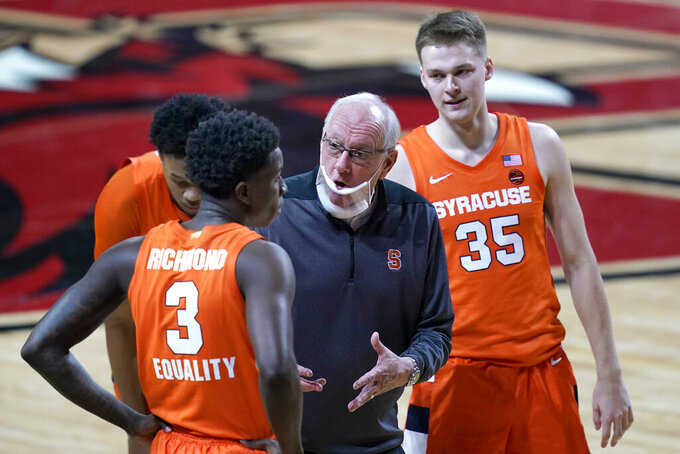 FILE - In this Saturday, Dec. 12, 2020, file photo, Syracuse head coach Jim Boeheim instructs his players during the second half of an NCAA college basketball game against Boston College, in Boston. Syracuse won the last two games on its revised regular-season schedule to remain in the hunt for a bid to the NCAA Tournament. (AP Photo/Elise Amendola, File)

Syracuse won the last two games on its revised regular-season schedule to remain in the hunt for a bid to the NCAA Tournament. Time for a needed break.

“We've been going really hard,” Syracuse coach Jim Boeheim said after a convincing 64-54 win over Clemson on Wednesday night. “Those games were all-out physical battles. We can use the break, there's absolutely no doubt. We’re pretty beat-up. I think it would be very hard to play a game Saturday for us. I certainly wouldn’t want to play somebody we’ve played twice. That makes no sense to me."

An afterthought at best after road losses last week to Duke and Georgia Tech, the Orange (15-8, 9-7 Atlantic Coast Conference) have clawed their way back into the postseason picture after also beating North Carolina 72-70, on Monday night.

All of a sudden the schedule is kind, and that's a good thing considering sophomore forward Quincy Guerrier has a sore knee and freshman guard Kadary Richmond has been nursing a leg injury. Against Clemson, Boeheim said Richmond was limping in the locker room, but he gutted out 18 minutes against the Tigers and had four assists with five points, all on free throws. He shared time at point guard with Joe Girard, who finished with seven points and seven assists, giving the position 11 assists with only two turnovers.

“Both of those guys have to play and have to help us,” Boeheim said.

Richmond also had four steals and 10 assists against the Tar Heels, the most by a Syracuse freshman since Kaleb Joseph also had 10 in an overtime loss at Villanova in December 2014. Guerrier played 32 minutes against Clemson and finished with eight points and nine rebounds.

Syracuse’s survival Monday night in a tight home game against North Carolina bucked a trend. The Orange were outrebounded by a wide margin — 53-33 overall, 26-13 on the offensive glass — and still managed to win. Nine blocks, 20 forced turnovers and 28 points scored off UNC miscues that included 15 Syracuse steals helped spell the difference against a team that had won all but one of the previous 11 games against the Orange.

The two wins gave a glimpse of the role 6-foot-11 Jesse Edwards likely will play going forward. Against North Carolina, the slender sophomore center played a season-high 24 minutes and was an important factor, also finishing with season highs in rebounds (8) and steals (4) before fouling out. Against Clemson, which went with a smaller lineup, Edwards played just three minutes.

The departure of small forward Elijah Hughes for the NBA after he led the ACC in scoring last season at 19 points a game left a big void, but Illinois transfer Alan Griffin has given the Orange similar production at the position. Griffin is averaging 15.3 points, 6.6 rebounds and leads the team with 53 3-pointers (one more than Buddy Boeheim) and 41 blocks. When he's on his game, as he was against Clemson — six 3s, 22 points and 10 rebounds — he's a handful.

"I think our whole team has gotten better,” Boeheim said. “I think it’s hard to go 9-7 in this league. This is a difficult league. I think these guys have done a great job. ...We’ll see how it all plays out at the end.”

Entering the weekend, Syracuse is seeded eighth in the ACC Tournament with a potential matchup against Duke (11-10, 9-8), which still has a rival game at North Carolina (15-9, 9-6) on Saturday.

“We’re in a good situation," Griffin said. "We finished strong with two wins back-to-back. Now, we’ve just got to get ready for next week.”