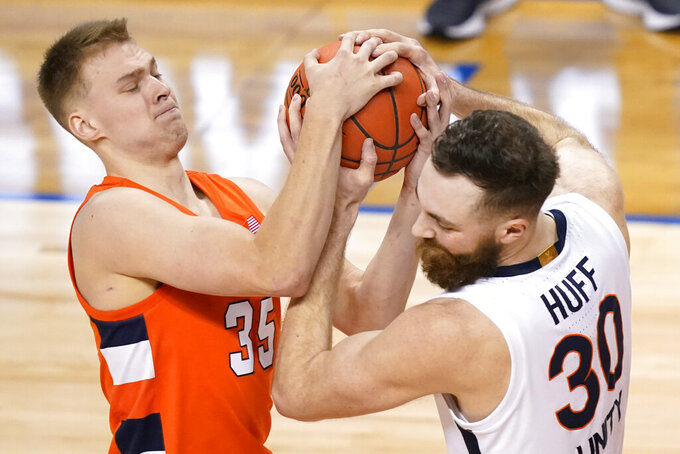 Virginia forward Jay Huff (30) battles for a rebound with Syracuse guard Buddy Boeheim (35) during the second half of an NCAA college basketball game in the quarterfinal round of the Atlantic Coast Conference tournament in Greensboro, N.C., Thursday, March 11, 2021. (AP Photo/Gerry Broome)

Syracuse guard Buddy Boeheim has been waiting to make amends for his only previous appearance in the NCAA Tournament.

Boeheim, the son of Syracuse coach Jim Boeheim, was on the court for 39 minutes of Syracuse’s first-round matchup with Baylor two years ago. He watched Baylor pick apart his dad’s trademark 2-3 zone in the Bears’ 78-69 victory.

Ninth-seeded Baylor set a school NCAA Tournament record with 16 3-pointers, four more than the Orange, who got none from their 6-foot-6 shooting guard. Boeheim missed all four tries from behind the arc in an 0-for-6 performance from the floor.

That was then. This is now.

After a slow start that was hampered by two COVID-19 team stoppages and a bout with the virus, the junior sharpshooter enters the tournament on a roll. In the Orange’s two Atlantic Coast Conference Tournament games, Boeheim averaged 29 points, two rebounds and four assists and shot 60.6% (20 for 33) from the field, including 11 of 20 (.550) on 3-point attempts.

“I felt like I was letting my teammates down in the beginning of the year, had to turn (it) around,” he said.

Simms said Clemson basketball coach Brad Brownell introduced Simms to Swinney and university President Jim Clements on a recruiting trip. The football coach and basketball player have kept texting and talking ever since.

Simms said Swinney typically messages him after games, including Tiger defeats to stay committed to hard work and strive for success. “He’s done nothing but support me,” Simms said of Swinney. “Even if we lose, he is kind of one of the first people to text me.”

West Virginia coach Bob Huggins got plenty of attention earlier this month when his name was again left off the list of finalists for the Naismith Memorial Basketball Hall of Fame. The snub prompted Baylor coach Scott Drew and Texas Tech’s Chris Beard to say on Twitter that Huggins deserves a spot in the hall.

Huggins has 899 career wins in 39 seasons. His 1992 Cincinnati team and 2010 West Virginia squads reached the Final Four, but his teams have never reached a national championship game.