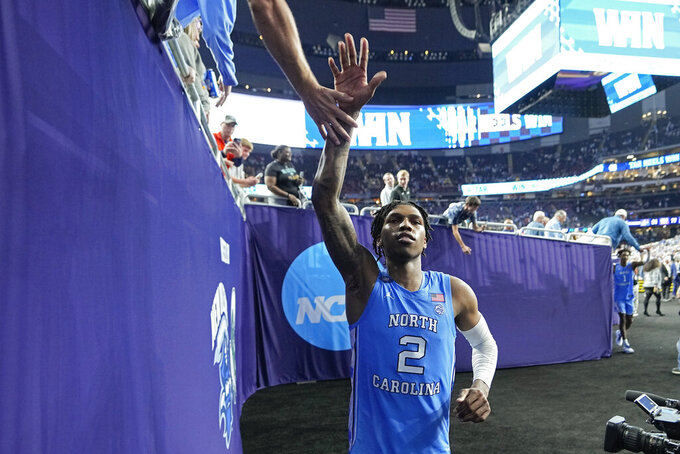 North Carolina guard Caleb Love greets a fan as he leaves the court after North Carolina's win against Duke in a college basketball game during the semifinal round of the Men's Final Four NCAA tournament, Saturday, April 2, 2022, in New Orleans. (AP Photo/David J. Phillip)

North Carolina guard Caleb Love is returning for his junior season, a huge boost for the Tar Heels after their improbable run to the NCAA championship game.

The 6-foot-4 Love announced his decision in a social-media video on Sunday, the last day for players to declare for the NBA draft.

“The opportunity to play at North Carolina is something I never take for granted,” Love said. “To play for the greatest fan base in the world, to play with the most amazing teammates I could ever imagine and to play for coaches who support and challenge me in every way are all blessings that make me feel so fortunate.”

Love ended the video by announcing: “I'm back.”

Love's return means the Tar Heels will bring back every starter except floor-stretching big man Brady Manek. Forward Armando Bacot was first to announce his return for a fourth season, followed by versatile top defender Leaky Black saying he would return for an extra year of eligibility granted by the NCAA due to the COVID-19 pandemic. Starting guard R.J. Davis announced this week he'd be back for a third season.

Love was considered a potential second-round NBA draft pick, ranked as the No. 49 prospect by ESPN. He has game-changing scoring potential, which was critical to the eighth-seeded Tar Heels reaching a record 21st Final Four in coach Hubert Davis’ debut season.

“Caleb’s passion for this team and program are what motivates and drives him to win a national championship and eventually have a long, successful career in the NBA,” Davis said in a statement. "Nobody is better at taking and making big shots in pressure situations. He’s one of the most gifted players I’ve ever been around and I’m extremely excited to coach him another season.”

He showed an ability to shake off struggles and fearlessly try — and make — big shots.

Against UCLA in the Sweet 16, he scored 27 points after a 1-for-8 shooting start. Two games later, he overcame an 0-for-5 start to score 28 points — including a huge 3-pointer in the final minute — in the Final Four win against rival Duke.

Love struggled in the title-game loss to Kansas, scoring 13 points on 5-of-24 shooting.

Beyond the returnees, the Tar Heels add four-star recruits in point guard Seth Trimble, power forward Jalen Washington and small forward Tyler Nickel, while three-star big man Will Shaver enrolled in January to work out with the team.