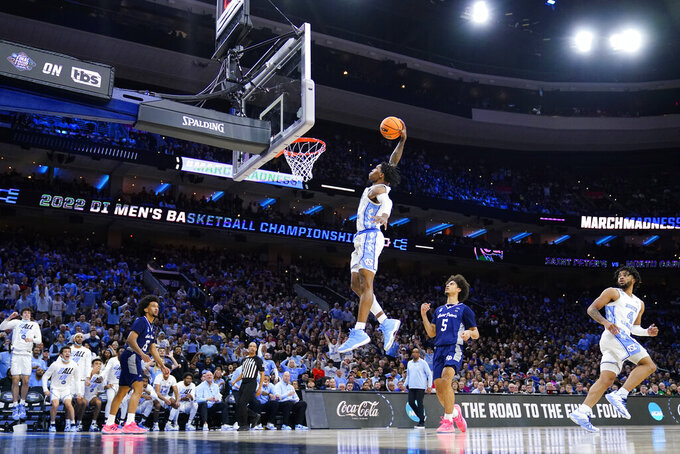 North Carolina's Caleb Love goes for a dunk during the second half of a college basketball game against St. Peter's in the Elite 8 round of the NCAA tournament, Sunday, March 27, 2022, in Philadelphia. (AP Photo/Matt Rourke)

NEW ORLEANS (AP) — Justin Tatum backed Duke after his son spent a year with the Blue Devils before moving on to the NBA. Yet when Saturday's game against rival North Carolina takes place in the Final Four, he'll have divided loyalties because of Tar Heels guard Caleb Love.

That's because Justin Tatum coached Love in high school, and he's loved watching as the sophomore has taken a huge leap with unflappable confidence, clutch performances and scoring eruptions in recent weeks. It's a big reason why the Tar Heels have reached this position, preparing for the national semifinals in the Big Easy after looking uncertain to even make the NCAA Tournament as recently as February.

“He's a great kid," Tatum said. "At the end of the day, he's an exceptional talent. He does have some things he's got to work on, and I see that happening. And I think he's really going to be ready for this stage on Saturday. I'm excited to see it.”

The 6-foot-4 Love, a former McDonald's All-American, is the team's No. 2 scorer at 15.7 points per game a year after struggling through a frustrating offensive season as a freshman. But Love's growth is as much about the way he goes about getting that production.

He's capable of going on a game-changing tear out of nowhere, highlighted by him scoring 27 of his 30 points after halftime in the Sweet 16 win against UCLA. Yet even more impressively, some of those runs can come amid the wreckage of bad starts or even a game's worth of struggles. It sounds simple, but Love seems capable of simply shaking anything off and looking unburdened the very next time he comes down the court.

“Never losing your confidence," Love said. “I know how much work I put in and how much time I put in the gym. I feel like my confidence never wavers, that I know that I can come up big in late moments and do what I do.”

The final week of the regular season stands out.

First came the home finale against Syracuse, as Love kept miss-miss-missing while the team fell behind in a game it couldn't afford to lose for its NCAA chances.

But after starting 1 for 8 from behind the arc, Love hit two key 3-pointers while scoring 14 of his 21 points in the final 2:23 of regulation and overtime to help the Tar Heels rally to win.

Days later, he overcame an 0-for-8 shooting start at Duke to score 15 of his 22 points after halftime in a stunning win that spoiled retiring Hall of Famer Mike Krzyzewski’s final home game.

It's a next-shot mentality that teammate Brady Manek said Love has spread throughout the team.

“He always feels like he's going to make the next shot,” first-year coach Hubert Davis said. "And I think that's a talent. And he has that, and he's really good at that.

“The other thing for Caleb is he's not afraid to fail. He likes being in that situation to take the shot, and be in those pressure situations and to be able to step up. I don't know where we would be without Caleb.”

Tatum has seen these flashes before — good and bad — from his time coaching Love at Christian Brothers College High School in St. Louis. Directing that confident aggression could sometimes be a challenge, though, with Tatum saying he'd try to ask Love to attack off the dribble for a layup before he launched four 3-pointers in a game.

He also remembered telling his assistant coaches, from the minute Love would hit his first 3, that “he's fixing to go test it and see how far he could go.” He saw a similar look during UNC's win against the Bruins, with Love showing an attitude of determination to prove he was "the best player on the floor.”

“He does have an internal switch like no other,” Tatum said. “And it's just, there's just something unexplainable.”

It’s all an example of his of his NBA potential and upside, which has helped elevate UNC’s offense as a whole as the Tar Heels (28-9) pushed to a record 21st Final Four, despite being a No. 8 regional seed.

Some has come through better decision-making, both in cutting down on turnovers (he’s had two or fewer in seven of eight games) and taking better shots.

Love has averaged 18 points in the four NCAA Tournament games so far.

“I’m extremely proud and happy for him, how he’s been playing in this tournament,” said Jayson Tatum, who played the 2016-17 season for Krzyzewski's Blue Devils. "No doubt in my mind that he’ll be playing up here in the NBA next year, but they've got to lose (this) week.”